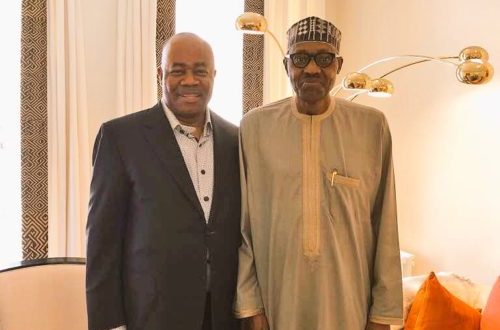 August 5, 2018 Comments Off on PDP’s Akpabio Meets Buhari in London, May Defect to APC Thursday 14 Views

Issues discussed were not diclosed.

Akpabio’s decision to leave the PDP has dampened PDP celebration over the defection of a dozen senators, three governors and some 30 members of the House of Representatives, who hitherto were members of the All Progressives Congress.

He is scheduled to switch to the APC in Ikot Ekpene on 9 August.

Akpabio was governor of oil-rich Akwa Ibom state from 2007-2015. He was elected a Senator in 2015 and was chosen as the minority leader for the Peoples Democratic Party senators.

APC Newspaper on its Twitter handle announced Saturday night that Akpabio was switching allegiance : “We can confirm that, HE, Sen (Dr) Godswill Akpabio is a card carrying member of @OfficialAPCNg effective August 4, 2018. @OfficialPDPNig has lost him. Official Reception in days”.

And APC United Kingdom in another tweet set the date for the defection: “Acting President, @ProfOsinbajo accompanied by Senator (Dr ) Ita Enang, and leaders of the APC in Akwa Ibom to formally receive Senator (Dr.) Godswill Akpabio into APC at Ikot Ekpene Stadium on Thursday 9 August, 2018. All lovers of Democracy are cordially invited”.