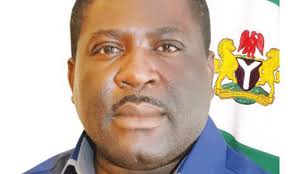 After a long cold war between the governor of Imo State, Owelle Rochas Okorocha and his deputy,  Eze Madumere, the state House of Assembly today reached for the big stick by impeaching the deputy governor, the Channels Television reports.

He was impeached by 19 of the 27 members of the Imo House of Assembly, the station reports.

The Assembly had earlier received a report by a panel set up by the state Chief Judge which allegedly indicted Madumere of gross misconduct.

Madumere has been having a running political battle with Governor Rochas Okorocha over the latter’s successor in 2019.

While Madumere seeks to succeed Okorocha, the governor reportedly supports his son-in-law.

The crisis worsened during the APC local and state congresses in the state with Mr Okorocha and his deputy supporting separate factions.

Although the APC faction supported by Madumere and a senator, Osita Izunaso, was initially recognised by the national leadership of the party, its election was upturned by the court.

Madumere could not be reached on phone at the time of this report. Repeated calls to his number were unanswered.

Share
Previous I spent four nights under a bridge when I moved to Lagos, says Jude Okoye
Next At Last, Bukola Saraki Quits APC Via Twitter