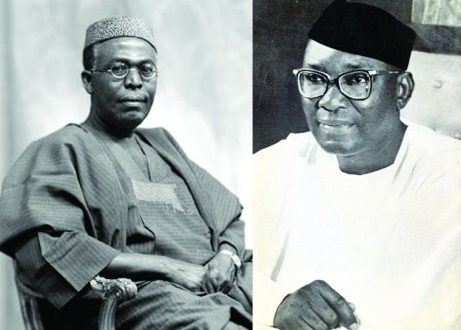 I remember Zik and Awo By Sylvester Asoya

It is very difficult to forget great men like Nnamdi Azikiwe and Obafemi Awolowo in this season of strange things. Today I remember these patriots. They had the best education and breeding, unlike the ruffians who have hijacked our political space at the moment.

For instance, the great Zik built University of Nigeria on the hills of Nsukka, a relatively unknown town at the time. He chose Nsukka above Onitsha, his home town. Awolowo, on the other hand, sited the then University of Ife in the historic town of lle-Ife, not Ikenne, his home town.

This altruism is rare today because of the greed and cheekiness of swashbucklers in public office. These hustlers who masquerade as politicians would rather build universities and other important monuments in their villages. A former governor, now chairman of one of the political parties who likes to threaten and grandstand actually built a university in his village. Citizens of that state at that time were appalled by the former governor’s crass nepotism. They also accused the governor of trying to undermine the existing university in the state which was grossly under-funded under his administration. Across the states in Southern Nigeria, most state universities are hosted by villages and towns of past governors. And even a refinery is coming to Katsina State, not for value but politics.

Last week, I sounded the alarm bells that the All Progressives Congress, APC may lead Nigeria to hell. My fears have come alive in Benue State, North Central Nigeria, where a few lawmakers, backed by forces in Abuja are desperately working to impeach the governor of that state. This was exactly what the Peoples Democratic Party, PDP tried to do in Rivers State during the tenure of Chibuike Amaechi about five years ago. But like PDP, APC will fail in Benue.

The problem with the APC and it members is that they have not in any way improved on the scripts of PDP. They are very poor imitators, desperate to cling on to power at any cost. The ruling party has also shown that they lack strategic thinkers. You will be shocked at the level of education and exposure of persons currently directing this drama in Benue State. But this is Nigeria. That is also the reason some foul-mouthed fellows would sit somewhere and declare that Nigerians have no alternative to certain public office holders in a country of nearly 200 million people. How sad!

It is now clear that the party that promised change is running out of ideas. The danger, for me, is that situations like this naturally lead to desperation and more blunders. This is why the rest of us must come together to take back our country. Nigeria cannot step back from the brink if we all keep quiet in the face of this festering evil.

Share
Previous Pregnant Goat Dead after ‘Gang Rape’
Next I spent four nights under a bridge when I moved to Lagos, says Jude Okoye