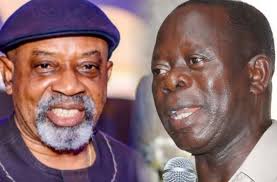 July 23, 2018 Comments Off on Oshiomole Threatens to Sack Ngige from APC 72 Views

The National Chairman of the All Progressives Congress (APC), Adams Oshiomhole, has threatened to sack the incumbent Minister of Labour and Employment, Chris Ngige, from the party.

Oshiomhole is having a running battle with Ngige over the refusal of the minister to inaugurate boards of parastatals under his ministry, several months after they were appointed by President Muhammadu Buhari.

Oshiomhole had written to Ngige, asking him to inaugurate all board members appointed under his ministry.

Ngige, however, replied and stated that he had inaugurated three boards in the ministry but would not be in a hurry to inaugurate that of Nigeria Social Insurance Trust Fund (NSITF), because of an alleged N40 billion corruption scandal by the former board.

Speaking with State House correspondents on Monday, Oshiomhole said “If the minister refuses we will suspend him from the party.”

He said he has resolved to return to internal discipline to the APC.

“For me it is the height of mischief for any minister, you cannot purport to be an honourable minister and you act dishonourably and nobody is greater than the party.

Oshiomhole said Ngige was not appointed as an independent candidate adding “no minister is above the party and they have taken undue advantage of the president’s fatherly disposition.”

He said the decision not to inaugurate the boards amounts to a disrespect for the office of the president by all the ministers that are yet to inaugurate board members under their ministries.

Apart from Ngige, Minister of State (Aviation), Hadi Sirika, is also yet to inaugurate some boards under his ministry.

The former Edo State governor said “it is the same green pen that made them ministers that appointed these boards that they are refusing to swear in. And it is absolutely illegal for a minister in a democracy to prey on the powers of the board because the laws establishing those institutions are clear, that the boards have procedures to follow.

“So, when a minister sits in his office to appropriate the powers of the board in a democracy, not in a dictatorship, award contracts that didn’t go through boards, those are clearly abuse of office for which they are liable.

“I am convinced that what they are doing is not with the endorsement of President Buhari. Over the period they have tried to drop the president’s name but I tell them it is the same authorities that appoint these people.

“So, we are informing them that it is either they comply to the president’s instructions or they comply with the party’s position or they go and administer outside the government.”

Oshiomhole said APC leadership only has respect for ministers who recognise that they are a product of a political party “and we are not negotiating that.”

“If they did that in the past, under our leadership we will not tolerate it. They either comply or we will expel them from the party. When we expel them we will find out how a government can keep a rebel in the cabinet. There is no question about that,” he said.

Share
Previous Fayemi Warns Against Illegal Appointments At College, Others
Next Above the Noise of Governance By Owei Lakemfa