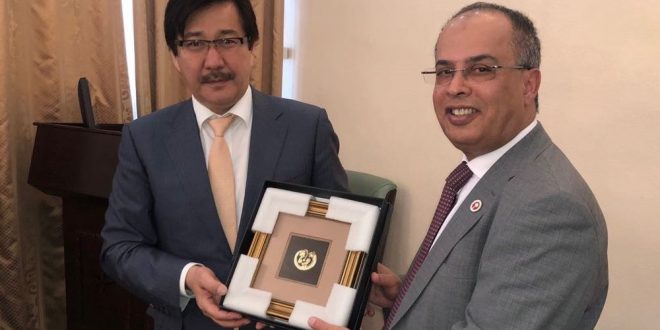 The deal was struck in the spirit of fostering a close international relationship between the Republic of Kazakhstan and the United Arab Emirates as well as developing bilateral relations in educational and scientific fields.

A release issued on the MoU indicated that the pact was also to make contributions to the development of cooperation between the institutions, AURAK and the Al-Farabi Kazakh National University.

The memorandum of understanding is aimed at promoting educational and scientific cooperation, which would be facilitated through the exchange of students and faculty, as well as collaboration in research.

The newly-signed agreement, according to the release, also provides a basis for cultural exchange between the United Arab Emirates and the Republic of Kazakhstan, as well as the possibility for even closer academic ties between the two institutions, through dual degree programs.

Hear him: “The celebrated signing between Al-Farabi Kazakh National University and American University of Ras Al Khaimah will increase collaboration between these two highly respected international universities and open the door of opportunity for the peoples of both nations.”

It is believed that with the signing of the MoU, both AURAK and Al-Farabi Kazakh National University will experience student success fostered from the collaborations of this partnership.

Prof. Hassan asserted, “In Al-Farabi Kazakh National University we have an esteemed collegiate cohort which will bolster the educational experience for our students with ample opportunities to advance them both in their studies and in making international connections.”

At present AURAK has a range of international partners across Africa, Asia, Europe, and North America, opening a wide spectrum of possibilities to students including exchange and study abroad programs for up to one year, as well as shorter summer sessions.