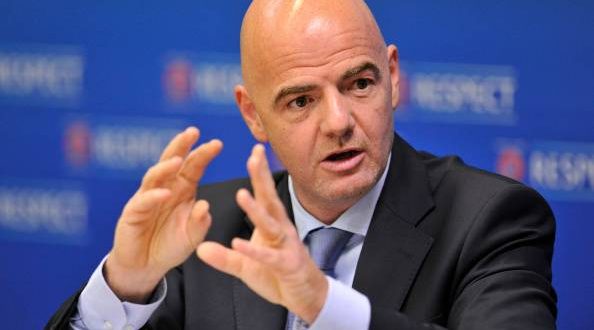 July 14, 2018 Comments Off on FIFA May Ban Nigeria Over NFF Crisis – Infantino 27 Views

FIFA president, Gianni Infantino, said Nigeria risked being banned by the body from participating in any international football competition over the leadership tussle rocking the Nigeria Football Federation (NFF).

NFF had been engulfed in crisis on account of a leadership tussle between Amaju Pinnick and Chris Giwa which exacerbated recently following a court judgement that recognized Giwa as the chairman, causing Minister of Youth and Sports, Solomon Dalung to direct the Pinnick led-NFF to vacate office.

Infantino spoke at Friday’s conference in Moscow, Russia, where he reviewed events at the ongoing 2018 FIFA World Cup in the Eastern European nation.

He said: ‘‘The situation is very clear. We have statutes that there can be no interference in the running of an association. Amaji Pinnick is the president recognized by FIFA. He is the president elected by members of the NFF. And that is the end of the story. If any external body thinks they can change the situation, then of course Nigeria will risk being banned as it has happened with other countries because we have processes that need to be respected.

“It is a very clear cut and simple case as far as we are concerned. We have made this very clear.

“Maybe you can help us transmit it if we didn’t come across very clear enough.”