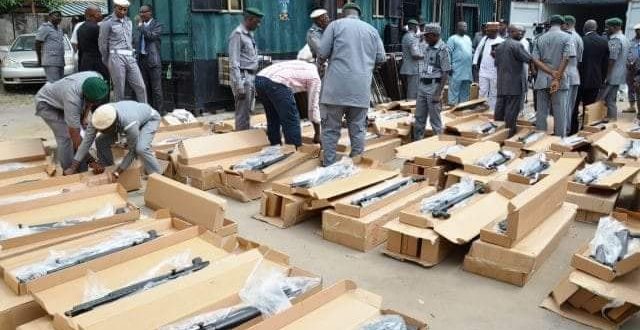 July 12, 2018 Comments Off on Customs intercepts cache of arms 16 Views

Operatives of the Nigeria Customs Service (NCS), Tin Can Island Ports have intercepted catche of Ammunition in two separate Operations on July 9th  and 10th, respectively .

“Following this discovery, the Customs Area Comptroller Comptroller Musa Baba Abdullahi directed the transfer of the suspicious container to the Enforcement Unit , where it was examined and found to contain 150  rounds of live ammunition and 28 pieces of various sizes of Jack knives.

“These items contravenes schedule 4 Absolute Import Prohibition List item 17 of the Common External Tariff and Section 46 of the Customs and Excise Management Act Cap C45 LFN 2004”, Ejesieme stated further, adding that both the container, a Suspect and exhibit are currently been held at the Enforcement Station pending further investigation.

Prompted by the development, the Command during Routine Tally Operations, and while vehicles were being discharged from the Vessel, MV GLOVIS COURAGE VOYAGE NO. 036, at 0330hrs of 10th July, 2018, at Five Stars Logistics Terminals, a black bag was found in one unpacked FORD EDGE with Chassis No. 2FMDK48C98BA05947.

“On examination”, according to the image maker, “the bag was found to contain the following;

“The vehicle and the exhibits are currently detained at the Enforcement Unit pending further investigation”, Ejesieme concluded.