Breaking News
Home / News / Osinbajo: I Didn’t Beg To Be VP, I Can Leave The position At Short Notice 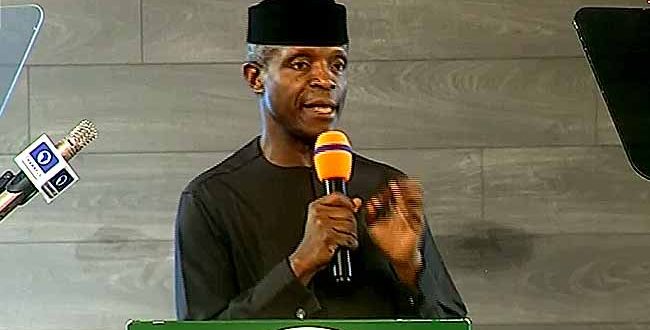 Osinbajo: I Didn’t Beg To Be VP, I Can Leave The position At Short Notice

Vice President Yemi Osinbajo says he did not beg to occupy his present position and that he is prepared to leave the position “at short notice”.

Osinbajo said he is not a politician and he will not fail to “stand up for my faith” when the need arises.

The vice-president said this on Tuesday while responding to questions from Christian leaders at a stakeholders’ meeting held at the Benue state government house, Makurdi.

Williams Avenya, Catholic bishop of Gboko, had said to Osinbajo: “The point I’m trying to make is that a day is going to come when you, as the vice-president, will bear the brunt of that problem of injustices in our land, especially those perpetrated on smaller ethnic groups that have no one to fight for them.

“So, as a Christian person, exonerate yourself from this situation.”

“Let me assure you that under no circumstances, none whatsoever, will I give up my faith or refuse to stand up for my faith.

“You can take that to the bank. Even the position that I currently occupy, I did not ask for it and I’m prepared to leave it at a short notice.

“But when the Lord Jesus Christ met me, He persuaded me by showing me clearly that there is such a thing as the evidence of things that are not seen.

“It is because of the evidence of things that are not seen, it is because you can make something out of nothing that I stand here today as vice-president.

“How possible can anyone say that the killing of women and children doesn’t matter because he is vice-president or because he is President? How is that possible? Certainly, it cannot be for a person who is born again. A renewed mind will know that there is justice, there is consequence even if there is no justice here on earth.”