Synagogue Building Tragedy: A Case Beyond The Ordinary By Dare Adejumo

May 10, 2018 Comments Off on Synagogue Building Tragedy: A Case Beyond The Ordinary By Dare Adejumo 15 Views

As Synagogue Church Of All Nations (SCOAN) is about to open its defence in the criminal charges brought against it over the collapse of its six-storey guest house in September 2014 in which scores of people died, the world is waiting eagerly for this historic titanic legal battle.
Clearly it is not only the SCOAN alone that is on trial but also the entire Nigeria and of course the humanity!

What exactly that is peculiar in this case? Was this the first time a structure would collapse with even greater tragedy in the world? Definitely not. What is astonishing and remains astounding till today was the extraordinary dimensions and jigsaw puzzle of the collapsed building.
It is obviously not going to be an easy case. The peculiarity and unusual nature of the collapse which defied all known scientific logic of foundational and structural ingredients of collapsed structures in the world’s history of construction or building industry!

Former Lagos State Governor, Mr Babatunde Fashola clearly foresaw this when he pointed out during an interaction with the media after visiting the collapsed site that: “the issue of Synagogue is highly technical and it requires experts to determine what actually happened to the building because it is not a thing that can be rushed into.”
Yes it is highly technical as can be seen in the legal battle from the Coroner inquest. Today the event of collapsed structure in Synagogue has become a bundle of academic research because of its strangeness for the advancement of knowledge.

Dr Stephen Ntoga, an international expert in civil, structural and material engineering and Dean Faculty of Engineering in Tanzanian University was at the site for thorough investigation with his team. His verdict was incontrovertible: “The collapse of synagogue building was completely strange. It goes beyond the issue of foundation or structural elements. The construction and the materials used were excellent.” Ntoga who is an embodiment of scholastic prodigy and had handled and partaken is collapsed structured across Europe and America and flaunting the British and American codes said he clinically examined the foundation where he found no element of crack, the aggregates of materials used from the sand, steels, cement, columns, beams, loading among others that the job he found done in the collapse Synagogue building also took a preemptive sensitivity of resistance of building construction in an environment prone to natural disasters such as earthquakes and therefore confidently declared that the job done on the collapse structure was super perfect!

He stated further that the types of steels used was the highest in the world and as such with what he found, without any palpitation the foundation of the collapse six storey structure would carry conveniently twelve floors by the strength of what he saw.
Dr Ntoga, a product of Aristotle University in Greece, an international colossus in Construction Engineering challenged anybody to dispute his findings!

Another expert from South Africa, Engr. Alfeus Mamafa who also carried out an independent and private investigating team at the instance of his country also admitted at the end that: “I found nothing wrong in the design and work done here. Structural failure will always happen from the foundation and in this case everything remained solid, no crack of any and with the structural elements nothing can affect or shake the building. It can never be a case of foundational or structural failure.”

In the same vein, Engr. Thabo Pheeha also an expert concluded after his team’s investigation that “the structure must have been affected by something else other than structural or foundational failure. It is not the case here because everything remained intact despite the collapse.”

Dr Folayan, a Geophysical expert with over 45 years practising experiences across the globe including USA declared angrily after his thorough examination of the collapsed building that he was ready to sacrifice his career if anybody could come out to challenge or dispute his findings that foundation of the building was in any way faulty. He described it as “adequate, perfect and superb.”

What then was responsible for the collapse? Prophet T.B. Joshua, The General Overseer of SCOAN has a reputation for excellence all over the world for whatever he lays his hands on to do. Everything around him clearly shows the mark of super standard and higher wisdom.
He is the only preacher who would hold Crusades abroad without collecting offerings or donations there. He would spent his own money all through and through and then even carry out a landmark charity in the country.
In him you find love and unequalled integrity.

T.B. Joshua had rushed down from a crusade in Cali Columbia and suddenly appeared in the Sunday service. He declared: “I could see a dark cloud gathering here and that is why I have to rush down.” He enjoined church members to be praying for this to pass over.

But like Jesus at the critical moment of His trial when he called God to take away the cup of sorrow away from him if it was His Father’s will, similarly the cup of sorrow of the collapse building could not be removed from Prophet T.B. Joshua.
Invariably from a superb intuition and higher spiritual intimation Prophet T.B. Joshua in a jiffy mounted surveillance CCTV cameras on the building with nobody able to decode what was in the offing besides the Man of Synagogue himself.

Today the world had seen clearly the perfidy and conspiracy of the collapse through the CCTV recordings. Within four seconds, a six storey building came down flat. It had never happened in the whole world.
Jericho Weapons in its website added more egregious dimension to the charade of the synagogue building collapse. It was a case of one Super power country accusing another as the mastermind of the collapse. What did he call TB JOSHUA offence? For having the effrontery to be boldly assisting and curing Ebola victims, a terrible affliction. programmed to pauperise Africa and to continue to keep Africa on her kneel before the Super Power country and its allies.

This perhaps may have informed the wisdom of TB Joshua in the use of words such as: ,” Spirit of man, Spirit of woman” for those people with the demonic Spirit of gay and lesbianism as euphemism while undergoing spiritual deliverance.

Clearly the case of Synagogue is a battle between the light and darkness. It is also like that of a child with an unfathomable fractured waist. The wisdom of Solomon beyond Legalism may be required because SCOAN is a blessing to the world.

DARE ADEJUMO is a journalist and public analyst. 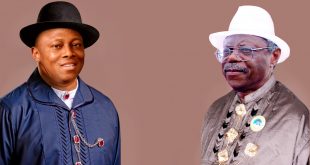