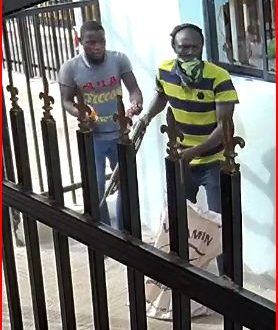 Following the banks robbery operation that was carried out on April 5 in Offa, kwara state by unknown armed bandits, the Nigeria Police Force says it has so far made arrests of more than 20 principal suspects whose details have been released to the public.

It would be recalled that armed robbers had attacked five commercial banks in Offa on the said date during which 17 persons, including policemen and a pregnant woman were killed.
In a statement issued Friday in Abuja by the police, signed by ACP Jimoh Moshood, Force Public Relations Officer, Force Headquaters, Abuja, the NPF also noted that it is making significant progress in the investigation into the incident.

The Police also said it has released the photographs of four other wanted suspects involved in the robbery operation to the public as information that would help effect their arrest.

“The wanted suspects are also being placed on INTERPOL Watch list and Red Alert. Other sister security and safety agencies are equally implored to arrest and hand them over to the nearest Police Station or Formation across the country or avail the Police with any information they may have or come across about these suspects,” the Force said.
The Police urged members of the general public who have any information on the wanted suspects to contact the Police through the following Phone numbers: 08062080913, 08126285268, 08032365122, 07056792065, 08088450152.

It also assured on protection of any informant as well as handsome rewards in addition to the pledge of Five Million (N5,000,000) by Kwara State Government to anyone whose information leads to the arrest of these wanted suspects.
“While the Nigeria Police Force, once again commiserate with the Government and people of Kwara State, most particularly the people of Offa, the Force will leave no stone unturned in ensuring that all the perpetrators of the Offa Banks Robbery are arrested and prosecuted,” the Police said.