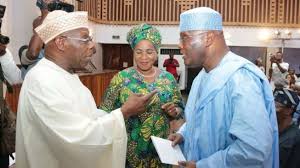 May 3, 2018 Comments Off on Obasanjo, Atiku Reunite In Lagos 8 Views

Former President Olusegun Obasanjo and ex-Vice-President Atiku Abubakar sat next to each other at the 10th memorial symposium of Abraham Adesanya, a chieftain of the National Democratic Coalition (NADECO).

The Cable reports that both men  shook hands and discussed briefly at the event which held at Muson Centre, Onikan, Lagos.

Obasanjo and Atiku, who were in charge of the country between 1999 and 2007, fell out shortly before the end of their time in power.

They have reconciled at different times, the last being the buildup to the 2015 election.

Abubakar had visited Obasanjo at his Hilltop residence in Abeokuta, Ogun state, but the peace deal collapsed later and the leaders returned to hot exchanges in the media.

Below is another picture at the event: 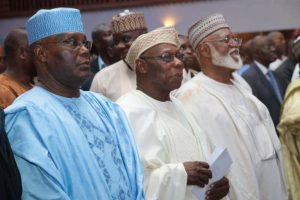