NDDC BOARD: Destabilizing A Peace Formula By Kesiye Newman

April 23, 2018 Comments Off on NDDC BOARD: Destabilizing A Peace Formula By Kesiye Newman 60 Views

They were appointed to complete the tenure of their predecessors. And they tried to acquit themselves well in office as heads of the board of the Niger Delta Development Commission (NDDC). But towards the twilight of the appointed term, a controversy began to build around the tenure of Nsima Ekere as Managing Director/Chief Executive Officer of NDDC and Senator Victor Ndoma-Egba as Chairman of the commission’s board. The controversy has continued to build and even degenerate to tension.

However, many in the Niger Delta believe that going by law, tradition, and their appointment letters, the argument over the tenure of Ekere and Ndoma-Egba should not have arisen, as their terms naturally ended last year.

In a petition to President Muhammadu Buhari in February, a national officer of the ruling All Progressives Congress (APC), Mr. Yekini Nabena, said the tenure of Ekere and Ndoma-Egba ended last year, in line with the terms of their appointment and the law establishing NDDC, which clearly stated that they were to complete their respective state’s tenures. Nabena said while Ndoma-Egba was appointed to serve out the tenure of Senator Bassey Ewa-Henshaw, a fellow Cross River State indigene, Ekere was picked to complete the tenure of fellow Akwa Ibom citizen, Mr Bassey Dan-Abia.

The replacements followed the dissolution of the NDDC board by Buhari in 2015. Ewa-Henshaw and Dan-Abia were appointed in December 2013 for a statutory four-year single term that should have ended last December.

Ekere’s appointment letter from the Office of the Secretary to the Government of the Federation (SGF), dated November 1, 2016, with Ref. No: SGF.55/S.2/C.3/IV/52, and signed by then SGF, Babachir Lawal, has been widely quoted in the media. The document, which has not been denied by the federal government, reads, “I am pleased to inform you that the President of the Federal Republic of Nigeria, Muhammadu Buhari, GCFR, has approved your appointment as Managing Director of Niger Delta Development Commission (NDDC), following your confirmation by the Senate on Tuesday October 11, 2016 in accordance with Sections 2(2) a and 12 (1) (c) of the NDDC (Establishment) Act 2000.

“The appointment took effect from November 1 2016 and you are to serve out the remainder of the term of office of your predecessor in line with Section 5(2) of the Act.”

“This is to humbly express my grave concern over the anomaly existing in the tenancy of the posts of Managing Director and Chief Executive of Niger Delta Development Commission (NDDC) as well as Chairman of the Commission’s Board,” Nabena stated in his letter to Buhari in February. “I have followed this case since late last year, when the tenure of the Managing Director and the Chairman officially ended and now feel constrained to write you, Mr. President, to highlight the aberration that abounds in their continued stay in office.”

That position resonates well in a region where many have seen enormous economic injustice and view interventions like the NDDC as a major attempt at redress.

A group under the aegis of Eastern Niger Delta Coalition had in a petition to Buhari dated November 9, 2017 condemned as immoral what they saw as an alleged attempt to extend the tenure of the NDDC managing director and the chairman. “To say the least, this attempt is criminal, offensive, satanic, and an anathema to the peace and development in the Niger Delta region as well as the harmonious coexistence of all the ethnic nationalities spread across in the nine oil producing states,” the group stated.

The ruling All Progressives Congress in Ondo State urged the president to dissolve the board of NDDC, saying it ended last December, according to a statement signed by the state publicity secretary, Mr Abayomi Adesanya.

“Any extension of the tenure of the board is unconstitutional and an attempt to give Cross River and Akwa-Ibom states undue advantage of serving for continuous period of six years as chairman and managing director, respectively, to the detriment of other member states,” Adesanya stated.

The paramount ruler of Opokuma clan in Kolokuma/ Opokuma Local Government Area of Bayelsa State, His Majesty, King Okpoitari Diongoli, Opuokun IV, Ibedaowei of Opokuma, added his voice to the call for dissolution of the NDDC board in an open letter to Buhari in January. The traditional ruler said, “The issue of the tenure of the Board and Management of the NDDC is a creation of an act of Parliament. Therefore, it should not be exposed to the whims and caprices of a group or individuals or even a state for whatever reasons.”

The NDDC Act 2000 provides for the rotation of the commission’s leadership among the nine member states of Rivers, Bayelsa, Delta, Akwa Ibom, Cross River, Edo, Abia, Imo, and Ondo, in alphabetical order. Under the Act, states that produce officers of a board dissolved before its terminal date retain their slots in any new board to complete the balance tenures.

Drafters of the Act, in their wisdom, designed the NDDC leadership this way, obviously, to maintain equity and eschew rancour among the member states of the commission. It was against this background that the new board Buhari constituted reflected the composition of the previous board in terms of the members’ states of origin, to complete their allotted tenures. It was also in the spirit of rotation that Mr. Timi Alaibe, from Bayelsa State, served only two years as substantive Managing Director of NDDC after acting in that post for two years.

No state since the inception of NDDC has taken more than a four-year single tenure. Obviously, that was why when soon after his inauguration in 2015 Buhari appointed Mrs Ibim Semenitari as acting Managing Director of NDDC, groups and individuals from Akwa Ibom State organised protests and even instituted court cases challenging her appointment and calling for a chance to complete the state’s tenure. The opposition to her tenure continued until an Akwa Ibom indigene, Ekere, replaced Semenitari in substantive capacity.

Ironically, Akwa Ibom State is now the prime antagonist to the rotational arrangement that brought its own, Ekere, to office.

The distortion seems to be encouraged by the Attorney General of the Federation and Minister of Justice, Abubakar Malami. A legal opinion by the AGF, dated October 11, 2017, and referenced LE.104/S.1/NDDC.01/25, said, “The inauguration of the present NDDC board is a fresh tenure as contemplated by section 3(1), that is, a term of four years which is subject to renewal.”

Trying to make a difference between dissolution and vacancy, Malami argued that there was no vacancy at the NDDC at the time it was dissolved. “The proper interpretation of vacancy under Section 5(2) of the NDDC Act, going by the ejus dem generis rule, is to consider the instances where a board member can be said to have ceased to hold office as provided for under Section 5(1) (a-f) of the NDDC Act. Vacancy as used under Section 5(2) is a general term whose meaning can only come from the specific items listed under Section 5(1). Therefore, a vacancy that requires the appointment of a successor to complete an unexpired term can only occur if the six instances provided for under the Act occur.”

The six instances, according to the AGF’s interpretation, include bankruptcy, suspension, conviction, unsound mind, misconduct, and resignation. He said none of these applied to members of the erstwhile NDDC board and so their successors could not be completing a balance tenure.

Interestingly, the current SGF, Mr. Boss Mustapha, whose office had specified that the new appointees were “to serve out the remainder of the term of office” of their predecessors, has toed the AGF’s line.

A group of seven appellants, comprising four people from Bayelsa State, and one each from Rivers, Akwa Ibom, and Abia states have filed a suit at the Federal High Court, Abuja, challenging the continued existence of the NDDC board. The case, which first came up on April 16 at Court 4, presided over by Justice Anwuli Chikere, has Buhari as first defendant, NDDC as second defendant, and the Minister of Niger Delta Affairs as third defendant. It was adjourned till May 21.

As the legal battle continues, the political outcry has also continued to grow. But many feel there is a political and moral imperative to ensure all that the Nigerian government has achieved in term of peace and security in the Niger Delta since the last decade is not destroyed in the current controversy. 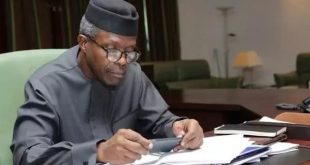