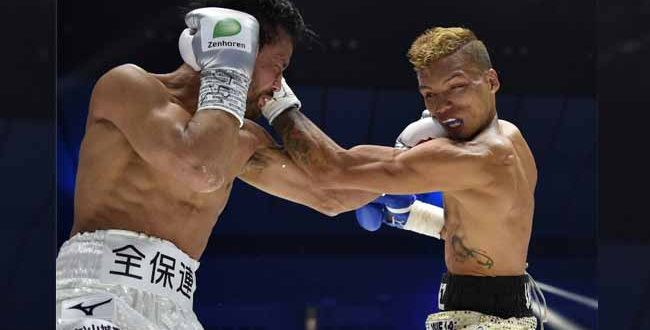 Japan Flyweight Higa Stripped Of WBC Title For Being Overweight

April 22, 2018 Comments Off on Japan Flyweight Higa Stripped Of WBC Title For Being Overweight 16 Views

Japan’s Daigo Higa, aiming to break the national record for consecutive knockouts, was stripped on Saturday of his World Boxing Council flyweight belt for being overweight on the eve of his title defence, local media said.

The 22-year-old boxer was scheduled to fight Cristofer Rosales of Nicaragua on Sunday in Yokohama about two months after equalling the national record of 15 straight wins by knockout.

But Higa weighed in at 51.7 kilogrammes (114 pounds), exceeding the flyweight limit by 900 grammes (32 ounces), local media said, adding that he is the first Japanese champion to be stripped of the title because of a weight issue.

Despite the setback, however, Higa may be able to fight on Sunday after measuring his weight again and could still get the consecutive knockout wins record, news reports said.

Higa burst onto the boxing scene in 2014 when he knocked out Thailand’s Saengkeng Saknarong in less than a minute.

He clinched the vacant WBC flyweight world championship in May, defeating Juan Hernandez Navarrete from Mexico with a technical knockout in the sixth round.

His first defence came by technical knockout, when he stopped France’s Thomas Masson in the seventh round.

In February, he defeated Mexico’s Moises Fuentes in his second title defence, completing a 15th consecutive victory by knockout.