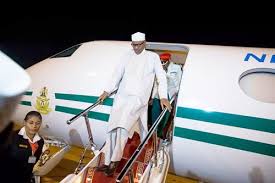 Buhari Returns To Abuja From London

April 21, 2018 Comments Off on Buhari Returns To Abuja From London 15 Views

President Muhammadu Buhari has returned to Nigeria from London where he attended the Commonwealth Heads of Government Meeting (CHOGM).

The President took off from London on Saturday afternoon and arrived at Abuja after 7 pm.

President Buhari had travelled to London to attend  CHOGM on April 9, shortly after declaring his intention to seek re-election at the All Progressives Congress’ National Executive Council Meeting in Abuja.

While in the UK, the president, who address the Commonwealth Business Forum made a controversial remark regarding Nigerian youths, which has received intense backlash on and off social media.

“More than 60 percent of the population is below 30, a lot of them haven’t been to school and they are claiming that Nigeria is an oil producing country, therefore, they should sit and do nothing, and get housing, healthcare, education free,” the president had said.

Femi Adesina, Buhari’s special adviser on media and publicity, said the remarks were twisted by mischief makers, who are trying to diminish the profile of President Muhammadu Buhari.

“Typical of their stock in trade, manipulators and twisters of statements of Mr President, who lie in wait to make mischief, interpreted the comment to mean that President Buhari had taken all Nigerian youths to the cleaners,” Adesina had said in Buhari’s defense.

“But elementary English recognizes a wide gulf between ‘a lot of’ and the word ‘all.’ How can ‘a lot of them’, suddenly transmogrify to mean ‘all of them?’ Mischievous and unconscionable!”

“This morning, before I came here, I saw Shell Group. They came to see me, and they are preparing to invest $15 billion in Nigeria. Really, we are not doing too bad,” the president added.