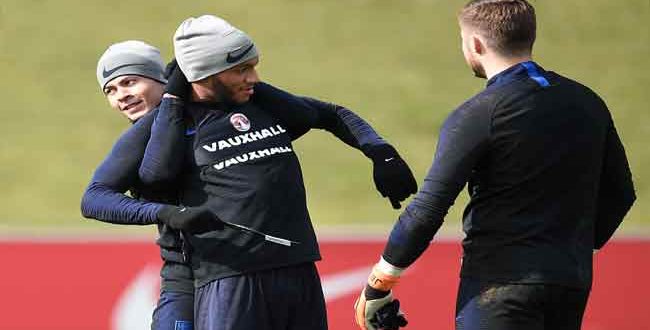 England’s Jack Butland is backing manager Gareth Southgate’s policy of keeping his goalkeepers guessing as to who will be the number one for the World Cup in Russia.

The Stoke player is set to start against Italy at Wembley on Tuesday and needs to keep pace with Everton’s rising star Jordan Pickford, who made it two clean sheets from two appearances during Friday’s 1-0 win in the Netherlands.

Long-serving first-choice Joe Hart is also in the frame while uncapped Burnley man Nick Pope has also been training with the squad for the first time.

Southgate’s reluctance to nominate his preferred candidate with just three more friendlies before heading to Russia is controversial but Butland said the internal battle drives up standards.

“It’s a good thing isn’t it, having competition? I enjoy it,” he said.

Butland said Southgate would make his decision when he is ready but until then the competition would be fierce.

“I think that’s a great way to go into a World Cup, the fact not knowing who it just yet shows the competition is great and whoever it will be is going to be coming off a battle, which is what we want,” he said.

Italy were also the opponents when Butland made his England debut in 2012, a 2-1 win in Bern.

At just 19 he became the youngest England goalkeeper but a series of injuries have seen him win just five more caps.

“Of course, six years ago, I was the youngest keeper to play for England and all of that, first cap, an incredible moment and I envisaged playing a lot more between then and now,” he said.

“But injuries happen and it was a massive setback for me. So I’ve dealt with bigger things than the odd (bad) performance, I’ve dealt with a hell of a long time out of the game.”

Liverpool defender Joe Gomez has been ruled out of the match with a left ankle injury suffered in his brief outing in Amsterdam.