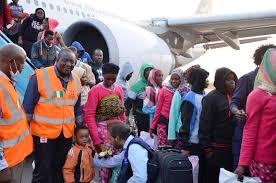 One hundred and forty-four Nigerian migrants have returned home from Libya, Tuesday night as part of the International Organisation for Migration (IOM) voluntary return scheme.

They arrived at the Murtala Mohammed Airport Lagos, and were received by the Senior Special Assistant on Foreign Affairs and Diaspora, Mrs Abike Dabiri, officials of the National Emergency Management Agency (NEMA) among others.

Among the returnees were 39 female, 97 male, two children and six infants.

Their return comes barely a week after news of slave trading of Africans in the North African country drew global criticism, with several leaders, authorities, as well as citizens condemning it.

Last week, a total of 140 Nigerians were deported. Read Here

The migrants who are mainly from Africa, arrive in Libya as they attempt the voyage across the treacherous waters of the Mediterranean sea to European shores.

Most migrants are placed in detention centres across Tripoli, with some requesting assistance to return to their home countries.

Some 600,000 migrants have reached Italy by sea from North Africa since 2014, most leaving from Libya’s western coast. More than 12,000 have died while trying.