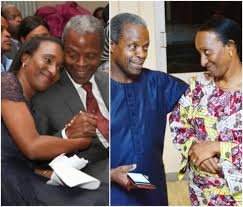 November 26, 2017 Comments Off on Your Heart is My Home’ — Osinbajo Celebrates Wife on 28th Wedding Anniversary 23 Views

Vice-President Yemi Osinbajo has again shown he stands the chance of being crowned one of the most romantic and caring husbands in the country.

He has one more time come out in the open to shower praises on his wife, Oludolapo.

Writing via his Twitter handle on Saturday, the nation’s number two citizen described his better half as “my treasure”.

He recalled how their love story began, telling her that her heart is his home.

“When our worlds collided, it was just a matter of time,” Osinbajo wrote.

“Our story began today, many years ago. The harmony in the symphony. My treasure! Happy Anniversary Oludolapo

“Your heart is my home.”

This may not come as a surprise to those who followed a similar scene played out when the vice-president’s wife turned 50 in July.

Osinbajo had also taken to Twitter to describe her as “treasure, wings, support and gift from God.”

Oludolapo, on her part, has also confessed that she would rather have the vice-president all to herself.

On hearing that he was going to be nominated as running mate to the All Progressives Congress (APC) presidential candidate, she became apprehensive.

“Because I knew I would have to share him with others, I mean political associates, official functions and all the likes. And I would rather have him to myself alone,” she had said.

“He is a lovely and kind man. He loves to a fault. He cares a lot. His life is all about caring and giving.”