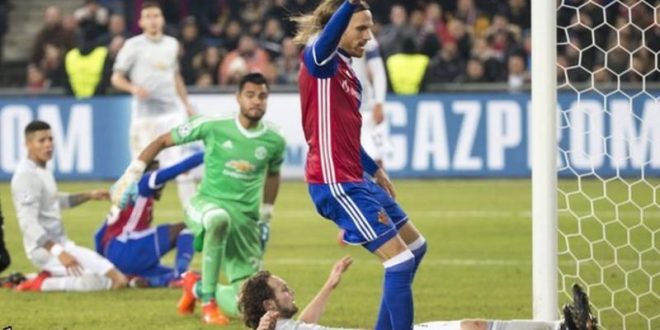 Lang scored the only winning goal against Man u

November 23, 2017 Comments Off on Lang scored the only winning goal against Man u 32 Views

Manchester United boss Jose Mourinho says his side should have been five or six goals ahead by half-time of their Champions League defeat by Basel.

United dominated the first half of their penultimate group game, with Marouane Fellaini and Marcos Rojo hitting the woodwork.

But, on the brink of securing the point they needed to reach the knockout stage, the visitors were undone by Michael Lang’s 89th-minute goal.

“The first half was the perfect half – without the goals. I cannot complain. I cannot blame the players,” said Mourinho.

“I think if we play a match like this 10 times, nine we win comfortably. In one we lose – and the one was now.”

Renato Steffen and Dimitri Oberlin had already gone close for the hosts in the second half before Lang turned in Raoul Petretta’s cross at the back post.

Anything better than a seven-goal defeat by CSKA Moscow in their final group game on 5 December would still guarantee United their place in the last 16.