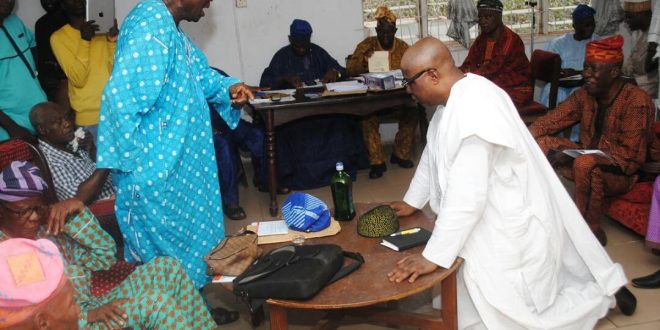 Top politicians in Ekiti State, consisting of notable elders and opinion leaders, have passed a vote of confidence on gubernatorial hopeful and Special Adviser to the President on Political Matters, Senator Babafemi Ojudu.
The group, under the aegis of Ekiti Elders Forum, EEF, converged at Igbara Odo to receive the presidential aide, sounded him out on his perceived intention to run for the Ekiti gubernatorial ticket before pronouncing their confidence in Ojudu’s ability to deliver the state from the present rot.

The elders, at the residence of their leader, Chief George Akosile, lamented the sorry state Ekiti is currently enmeshed and said there is need for a vibrant leader who could brave the odds and rescue the sinking state while also pleading for cohesion among those competing for the Ekiti top job so as to be able to present a formidable front to take power from the current government.
The elders were majorly retired very senior civil servants, senior lawyers, educationists, captains of industries and sundry egg heads.
Speaking at the occasion, Akosile, who presided over the meeting received Ojudu into the fold, saying the elders need his closeness at this crucial stage to galvanise the state to optimum speed in development.
According to him, the need for the progressive minded Ekiti indigenes to come together to form a common front to liberate the state from the grip of poverty, squalor and dwindling reputation has become a must in view of lingering abysmal drop in standard of living among the people.
Akosile noted that though mistakes have been made on the parts of past government and the governed, the time has come for the people to bury the past and work together in a collective bid to save the state from imminent collapse

“We have made a costly mistake by voting a wrong person to take over the driving seat in piloting the affairs of the state and we have all paid dearly for it.

“Today we are at a crossroad. All we need to do now is to find a way to correct the grievous errors of the past. We have listened to you several times and we have no doubt in our mind that you genuinely love your people. We want you to be very close to us. We know you have the capacity to actually deliver us from the oppressive reign of the present government. You have done it before and we believe you can still do it,” he said

The elders who expressed fear in the escalating number of aspirants for the governorship seat in the All Progressives Congress, APC, appealed for a consensus amongst the aspirants to present a common front to battle the on-going shenanigans in governance

They pleaded for unity of purpose that would ensure that the party remain united after the primaries to win the July 2018 gubernatorial election.

Another elder, Professor Muyiwa Agbalajobi, extolled the qualities of Ojudu, saying he has an impeccable antecedent that makes him tower above other aspirants.

“Before you joined politics, you have used your newspaper medium (TheNews/Tempo and PM News), to propagate the interest of the masses. Your stance, right from the time of military dictatorship is what makes some of us believe in your ability to deliver Ekiti people from the present bondage. We have the confidence in you that you will use your position to assist us. Even beyond being a governor, we know you have what it takes to face the current storm disturbing our peace. We look forward to receiving you at the elders’ forum one day. Right now, we are in captivity in Ekiti, rescue us,’ he said

Responding, Ojudu commended past efforts of the elders in making sure that Ekiti State maintains decent reputation in the country. He however urged them to persevere in their duty as elders to check the excesses of the younger ones so that they don’t lose focus on the progressive lane.

“Our major problem in Ekiti is that we do not give our elders their roles to play. The idea of saying the governor is the leader of the party cannot work here. You have been in politics before many of us were born. You know the rules of the ganme better. So, your roles are very important in the development process of any society,” he said

He however promised the elders that he would never disappoint them, noting that his ambition has no selfish attachments other than to liberate the people.

“My parents are both from Ekiti,, so I have no other place to run to. My coming out is selfless. I have always been a progressive and I will never deviate. If I die today and you put the PDP flag over my dead body, I will wake up to protest,” he said.

Share
Previous EFCC has abandoned my client, says lawyer of Ikoyi whistleblower
Next Dickson Plots Campaign Of Calumny Against Me, Sylva Cries Out