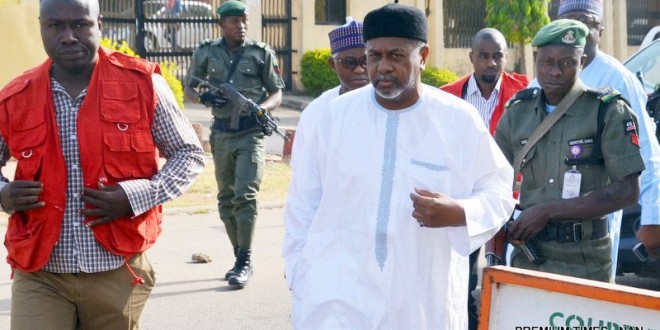 I Cannot Recall My Dealings With Metuh, Dasuki Tells Court

November 1, 2017 Comments Off on I Cannot Recall My Dealings With Metuh, Dasuki Tells Court 34 Views

The detained former National Security Adviser, Sambo Dasuki has told the Federal High Court in Abuja, that he could no long remember the details of his dealings with the former National Publicity Secretary, Olisa Metuh, in 2014.

When asked if he knows the functions of the National Security Adviser, Dasuki said it is public knowledge that he is essentially a principal staff officer in the office of the president.

He was then asked why he is in court.

Dasuki said he is in court to answer a subpoena even though he has not benefitted from other court rulings.

The court then asked Dasuki to explain why Chief Metuh and his company are being charged for receiving money from his office as NSA.

Dasuki said it will be difficult to give any details on the issue of monies paid to Olisa Metuh and his company without references to his records.

“Three years is a long time to recall such. I cannot answer questions on the charges without consulting my records,” Dasuki said.

He was then asked to tell the court when he will have access to his records.

The former NSA said, as soon as the authorities decide to obey four subsisting orders for bail in his favour and one ECOWAS court ruling and release him from the ‘hole’ he is in, that is when he will be able to give a timeline.

“But as long as I am in detention the answer is I don’t know,” Dasuki said.

When asked If he is making efforts to enforce the orders. He said he has processes in court and maybe by the time the case gets to the Supreme Court and it is in his favour those in charge today will obey.

He was then asked to confirm if his appeal at the supreme court is on the 25th of January 2018.

The counsel to Metuh in his application to the court said he has a witness who is willing to testify but after taking introductory questions, he is unable to answer questions with regards to specific actions of his when he was NSA.

“My witness insists that he has to refresh his memory and look at his document before he can give correct answers to questions been asked,” he said.

He added that Dasuki’s position is justifiable, because even the registrar of the court warned him against giving any false witness.