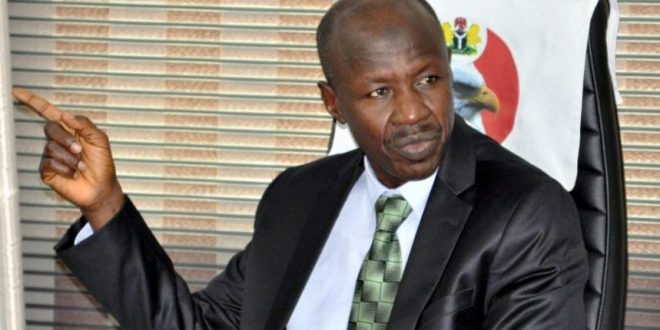 Magu: Those protecting Maina are making his arrest difficult

October 30, 2017 Comments Off on Magu: Those protecting Maina are making his arrest difficult 23 Views

The acting chairman of the Economic and Financial Crimes Commission (EFCC), Ibrahim Magu, acting says those offering protection to Abdulrasheed Maina, ex-chairman of Pension Reform Task Team (PRTT), have made it difficult for the agency to arrest him.

Magu, who did not disclose the identity of the persons allegedly protecting Maina, absolved himself of any blame in connection to the initial escape of Maina.

In 2013, Maina fled the country after the EFCC declared him wanted over alleged pension fraud.

The top civil servant returned to the country under controversial circumstances and was reinstated as a director in the ministry of interior.

President Muhammadu Buhari ordered his dismissal and demanded a probe.

Speaking when he featured on Sunrise Daily, a programme on Channels Television, Magu described Maina’s reinstatement as “devastating”.

He said the anti-graft agency would not spare anyone involved in it.

“We would go after everybody who is involved. I am telling you, we will not spare anybody,” Magu said.

“He has people who are protecting him and that has made it difficult for us to get him arrested. You can imagine, he was promoted. It is devastating, it is beyond my understanding.”

When asked if he knew the whereabouts of Maina, he said: “Of course if I knew why would I be appealing to Nigerians to give us support.

“We are determined to get to the root of this matter. That’s why we have renewed the investigation. We will retrieve all property or whatever must have been stolen from public funds.

“This is something that we have done as far back as 2011. The matter has been in court, and Maina was also charged before the court. He was arraigned in absentia. I assure you, we will get him sooner or later. The national assembly is supporting us. We are collaborating and we are also giving them support. We have no problem with national assembly.”

Magu said the support from other security agencies was not satisfactory, while calling on them and other Nigerians to give more support to the anti-corruption fight.

“There are some support, synergy, cooperation from time to time but it is not satisfactory because every security agency has some responsibilities in the fight against corruption,” he said.

“I want us to be fully committed in the fight against corruption because the greatest enemy of Nigeria today is corruption and the corrupt people are now celebrating.

“The way the media and other Nigerians can help us is to give us information to get Maina arrested.”