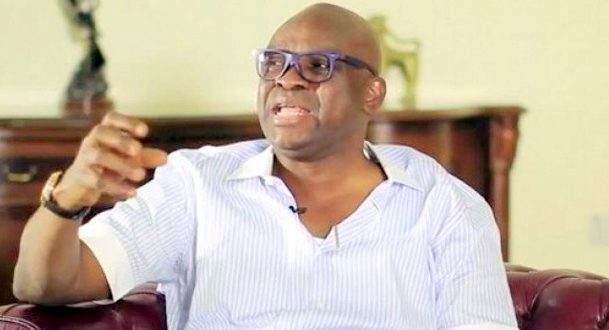 Ekiti State Governor, Ayodele Fayose, has condemned the arrest of the state’s Commissioner of Finance and the state’s Accountant General by the Economic and Financial Crimes Commission (EFCC) as shameful.

Earlier, the EFCC had told announced that the governor’s aides were arrested on Thursday over the allegations of mismanagement of bailout funds by the state government.

Hours after the arrest, Governor Fayose condemned the anti-graft agency’s action and wondered why they were arrested the same day he declared his ambition to contest the 2019 presidential election.

“Arresting my accountant general and commissioner for finance, as fact, today is shameful,” he said in his appearance on Politics Today.

“Why did it coincide my declaration? You are so intolerant of opposition, I cannot be perturbed by that. Even my predecessor has been alleged, documents filed into the EFCC and nobody has called him for one day.”

The governor noted that he is not bothered, saying “anybody charged to court is assumed innocent until the court says otherwise.”

On allegations that the bailout funds allocated to the state were mismanaged, he said, “May I say to you expressly sir, that your story is incorrect.”

Fayose explained further, “Ekiti got the least. Ekiti got a bailout of N4.7b; the state wage bill is 2.6, the local government is 2.4 which automatically amounts that the bailout, even if it’s used strictly and only for salaries, cannot pay salaries of both state and local government for one month.