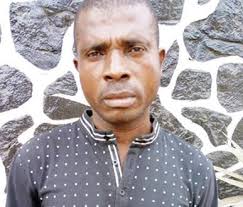 August 25, 2017 Comments Off on Man defiles three under age girls in Ogun 18 Views

The suspect and the victims, whose ages ranged between nine and 12, were said to be residents of Agboola Close, in the Sango-Ota area of Ogun State.

Udoh was alleged to have had carnal knowledge of the girls when his wife and parents of the victims were not at home.

The suspect, police report indicated, usually lured the victims into his room under the pretext of sending them on errands.

The state Police Public Relations Officer, Abimbola Oyeyemi, said the suspect was arrested when the mother of one of the girls discovered traces of semen on her pants.

He said, “The mother of one of the girls noticed what looked like sperm in her pants while washing them, which aroused her curiosity. The discovery made her to question the girl.

“This was what led to a revelation that the suspect had been defiling her and two others, whenever their parents were not at home.”

He said the discovery led the fathers of the three girls to jointly make a report at the Sango-Ota Divisional Police Headquarters.

The Divisional Police Officer, Akinsola Ogunwale, was said to have detailed detectives to arrest the suspect.

Oyeyemi said the three victims had been taken to a general hospital for treatment and tests.

“The state Commissioner of Police, Ahmed Iliyasu, has ordered the immediate transfer of the case to the Anti-Human Trafficking and Child Labour Unit of the State Criminal Investigation and Intelligence Department, Abeokuta, for further investigation and possible prosecution of the suspect.

“He also warned parents to always take the security and welfare of their children, especially the female ones, seriously in order not to make them easy preys of shameless predators.”