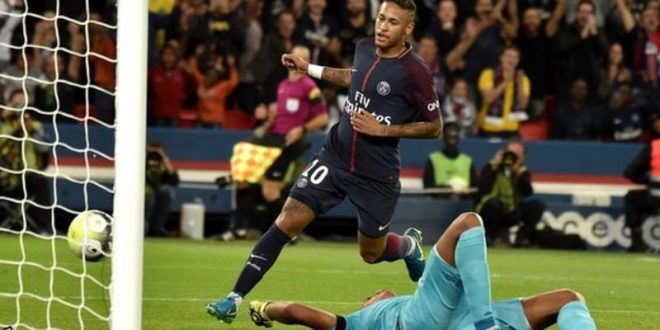 Neymar scored twice on his home debut at Paris St-Germain

August 21, 2017 Comments Off on Neymar scored twice on his home debut at Paris St-Germain 26 Views

Neymar scored twice on his home debut as Paris St-Germain netted four of their six goals with only 10 men to thrash Toulouse and go top of Ligue 1.

Adrien Rabiot fired in and Edinson Cavani made it 3-1 from the spot moments after Marco Verratti saw red.

Christopher Jullien’s header made it 3-2, but stunning strikes from Javier Pastore and Layvin Kurzawa settled matters before Neymar’s late effort.

The result moved PSG to the top of the table on goal difference, with Monaco and Saint-Etienne also maintaining their 100% winning records this weekend.

It was a fantastic display by last season’s runners-up, who will be expected to regain the French title and challenge strongly in Europe having paid Barcelona the huge fee for Brazil forward Neymar.

They were stunned early on when midfielder Gradel – on loan from Bournemouth – produced a sublime volley from a corner to put the visitors ahead.

Neymar, who twice threatened earlier, equalised in the 31st minute with a simple finish after Rabiot’s low strike was parried into his path.

The 22-year-old France midfielder’s wonderful, low, angled strike put PSG into the lead, but their hopes of a third successive win were hit when Verratti was shown a second yellow for a late tackle on Toulouse captain Jullien.

However, PSG did not ease up and scored their third when Uruguay striker Cavani converted a penalty given for Andy Delort’s foul on Neymar.

Jullien’s header reduced the deficit, but only for four minutes before substitute Pastore’s superb strike and full-back Kurzawa’s spectacular scissor-kick from Neymar’s corner all but sealed victory.

And in stoppage time, Neymar grabbed their last when he showboated past the Toulouse defence and fired in low past the unfortunate Alban Lafont.