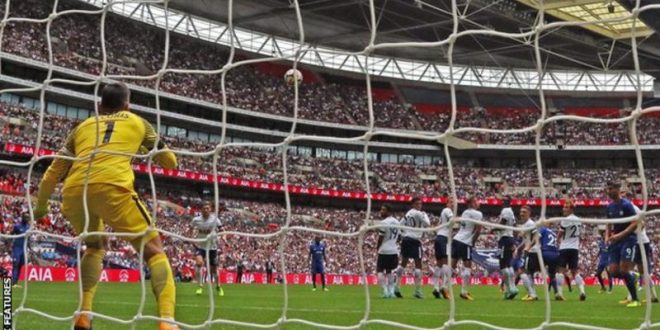 August 21, 2017 Comments Off on Chelsea manager Antonio Conte praised chelsea as they win their first match against Tottenham 14 Views

Chelsea manager Antonio Conte praised the “commitment” of his team in a “moment that is not easy” as they bounced back from their opening-day loss to Burnley by beating Tottenham at Wembley.

Marcos Alonso scored a late winner for the Blues as Spurs started life at their temporary home with a disappointing defeat.

Spurs responded strongly with Harry Kane hitting the post and it looked like they had earned at least a point when substitute Michy Batshuayi headed Christian Eriksen’s free-kick into his own net with eight minutes left, Chelsea cursing as Willian had also hit the upright.

However, the Blues showed trademark strength of character to secure a morale-boosting win after 88 minutes when Alonso scored his second, with Spurs keeper Hugo Lloris guilty of a serious error in allowing the shot to go underneath his body.

“We only have to think on the pitch and not to give answers to people,” said Conte, whose team were reduced to nine men on the opening day and are without striker Diego Costa, who remains in Brazil.

“This moment is not easy for us but I am very happy to have this group of players because they showed me great commitment, desire and will to improve after a great season. We only need to focus on the pitch, outside does not matter for us.

“I want to thank my players – every one. I saw today the fighters. I’m very happy when I see this type of game. I’m not speaking about football, but this spirit, this heart, this desire.”

For Spurs, who did not lose a Premier League game at home during 2016-17, the result means they have now lost seven of their past 10 games at what will be their temporary home while awaiting completion of a new stadium at White Hart Lane.