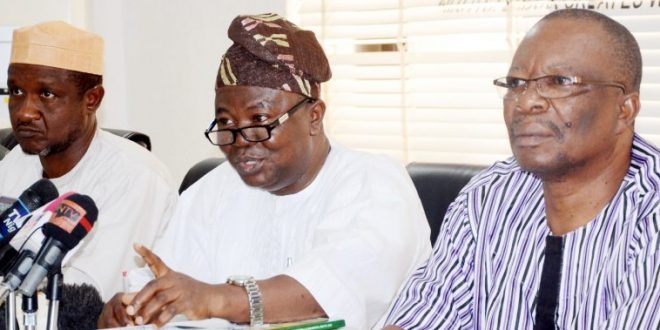 The Academic Staff Union of Universities has commenced a nationwide indefinite strike to protest against the failure of the Federal Government to implement the terms of the agreement reached between the union and the government in 2009.

The President of ASUU, Prof. Biodun Ogunyemi, during a press conference in Abuja on Monday, said the strike would be comprehensive as lecturers would withdraw all services including teaching and attendance of meetings in all the universities in the country.

Ogunyemi said the decision to embark on the strike was taken at an emergency meeting of the National Executive Committee of ASUU on August 12, 2017.

The ASUU president explained that the union decided to opt for a strike after the Federal Government failed to implement the 2009 agreement and a Memorandum of Understanding it signed with ASUU in 2013, among others.

He listed the areas in dispute in the current industrial action to include funding for the revitalisation of public universities, earned academic allowances, the registration of the Nigerian Universities Pension Management Company and pension matters, fractionalisation and non-payment of salaries and the issue of universities staff schools.

He said, “On November 16, 2016, our union embarked on a week warning strike to sensitise stakeholders to the issues in dispute. What initially appeared like efforts to address the issues soon fizzled out immediately the action was suspended on November 22, 2016. ASUU did its best to get the Federal Government in particular to fulfil its promises through a series of letters and consultation meetings. However, all was to no avail.

“Meanwhile, our members across the country were getting increasingly frustrated and disenchanted. It became evident that their patience had been tasked beyond reasonable limit, while government’s insensitivity imposed severe burden on the leadership of the union.

“Consequently, based on a nationwide consultation with our members, an emergency meeting of the National Executive Council of ASUU rose on Saturday, August 12, 2017, with a resolution to embark on an indefinite strike action starting from Sunday, August 13, 2017.

“The nationwide action is total and comprehensive. During the strike, there shall be no teaching, no examination and no attendance of statutory meetings of any kind in any of our branches.’’

He recalled that the failure of the government to implement the 2009 agreement resulted in an indefinite strike in 2011, 2012 and later 2013.

He said the strike compelled the government to sign a MoU with the union on December 11, 2013.

According to him, the MOU was meant to reinforce implementation of the agreement reached with the government.

Ogunyemi said the government agreed to commit N1.3tn in six years to the revitalisation of the university system with a planned annual release of N229bn, starting with N200bn in 2013.

The government was also said to have agreed to pay the outstanding balance of earned academic allowances after verifying the level of payment from an initial of N30bn provided for the purpose and others.

The ASUU President lamented that the Federal Government dashed the expectations of the union as it reneged on fulfilling the agreement for the annual release of the N200bn for the revitalisation of the university system.

He said the government had failed to release N825bn of the funds it signed in the MoU for the university system.

He lamented that the situation in the state universities was more pathetic as some state governments had chosen to establish new universities instead of funding the existing ones.

He said the issue of the earned academic allowances, which was a major aspect of the 2009 agreement and the 2013 MoU, had been abandoned by the government.