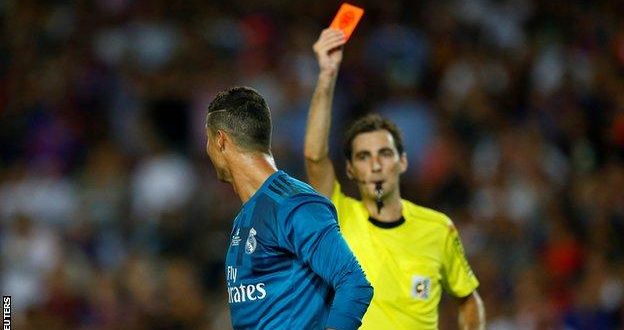 Cristiano Ronaldo scores and sent off

August 14, 2017 Comments Off on Cristiano Ronaldo scores and sent off 40 Views

Cristiano Ronaldo scored and was then sent off as Real Madrid beat Barcelona 3-1 in the Spanish Super Cup first leg.

Gerard Pique slid Marcelo’s cross into his own net before Lionel Messi levelled with a penalty.

Ronaldo, who was a substitute, restored Real’s lead when he ran from halfway before smashing an effort home.

He was booked for taking off his shirt to celebrate and shown a second yellow shortly after for a dive – before Marco Asensio scored Real’s excellent third.

Ronaldo felt he should have had a penalty when he went down under pressure from Samuel Umtiti, and appeared to shove the referee in the back after he was shown the red card. 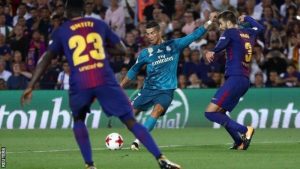