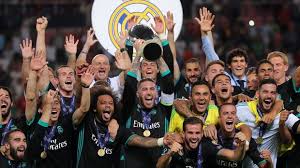 Goals from Casemeiro in the 24th minute and Isco in the 52nd minute put the Spanish side in control of the game, but United pulled one back through new signing Lukaku.

It wasn’t, however, enough to overturn the deficit and give manager Jose Mourinho his first Super Cup trophy.

With the victory, Real Madrid who made history earlier this year by becoming the first team to win the Champions League back-to-back, have retained the Super Cup title that they claimed by beating Sevilla on August 9 last year.