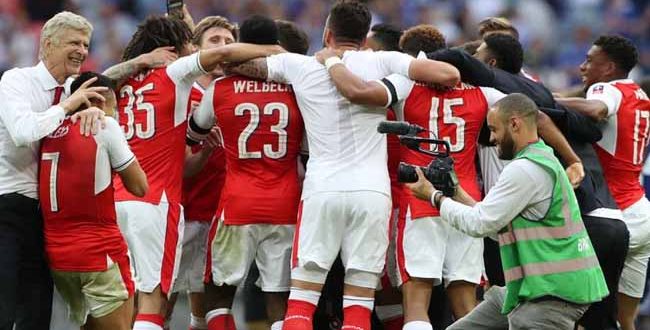 Olivier Giroud scored the decisive spot kick as Arsenal beat Chelsea in a penalty shootout to win the Community Shield at Wembley on Sunday.

The Premier League and FA Cup winners were locked at 1-1 after an evenly contested 90 minutes.

Giroud stroked home after Alvaro Morata and Thibaut Courtois missed for Chelsea in a shootout.

Chelsea’s Victor Moses had opened the scoring when he reacted fastest to smash a loose ball past Petr Cech in the 46th minute.

After a while, Arsenal substitute Sead Kalasinac equalised in the 82nd minute, heading home to cap an impressive performance.

Chelsea’s Pedro was dismissed for a foul on Mohamed Elneny which led to Arsenal’s equaliser while Arsene Wenger’s side also handed a debut to record signing Alexandre Lacazette.

Chelsea begin their Premier League title defence when they host Burnley on Saturday, while Arsenal entertain Leicester City on Friday.