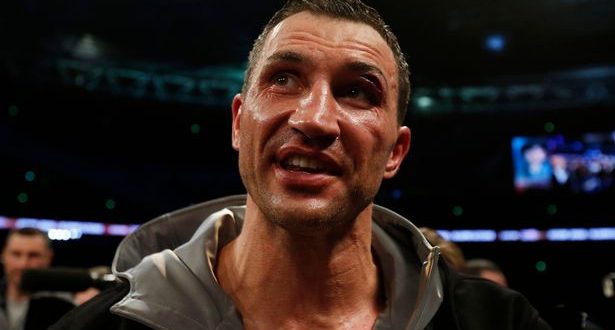 August 3, 2017 Comments Off on Wladimir Klitschko retires from boxing 13 Views

Wladimir Klitschko has announced his shock retirement from boxing with immediate effect, ending any chance of a rematch against heavyweight world champion Anthony Joshua.

The 41-year-old Klitschko, who enjoyed a 21-year career in the win in which he won 64 of his 69 fights, was famously beaten by Joshua in an almighty heavyweight scrap on 29 April this year in an 11th round stoppage.

The Ukrainian retires as one of the sport’s true greats, having held the WBA, IBF, WBO and IBO heavyweight titles, as well as the lineal crown, and remains the second-longest serving heavyweight champion of all time behind Joe Louis with 18 consecutive defences over a nine-year span.

Joshua declared on Wednesday that he wanted Klitschko to agree to a rematch by the end of the month in order for a November bout to take place in Las Vegas, with promoter Eddie Hearn already starting talks over a second fight in the space of the year between the two giants.

However, Klitschko released a statement on Thursday morning to declare his immediate retirement, thus ending any chance of a rematch against the 27-year-old Briton.

“I deliberately took a few weeks to make my decision, to make sure I had enough distance from the fight at Wembley Stadium,” Klitschko said in a statement released on his website. “As an amateur and a professional boxer, I have achieved everything I dreamed of, and now I want to start my second career after sports.

“I would have never imagined that I would have such a long and incredibly successful boxing career. I’m very thankful for this. Thanks to everyone who has always supported me. Especially my family, my team and my many fans.”

Klitschko’s manager, Bernd Boente, added: “Especially after this terrific fight at Wembley Stadium it was a very tough decision for Wladimir to make. But he has always emphasized that he wanted to retire if he didn’t have enough motivation anymore. Therefore this is definitively the right decision.