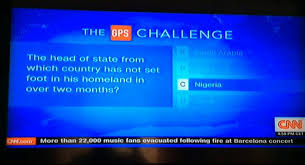 It’s been 84 days since President Muhammadu Buhari travelled out of the country — and reports of his absence have continued to dominate news headlines locally and around the world.

On Sunday, US news network CNN made a mockery of his absence on GPS, a programme hosted by Fareed Zakaria.

The American journalist, during a segment called ‘GPS challenge,’ posed a trivia to viewers of his show.

“The head of state from which country has not set foot in his homeland in over two months?” read the trivia which had multiple options, including Syria, Saudi Arabia, Cuba and Nigeria.

President Buhari has been in the UK since May 7, where he has been receiving medical treatment.

Though he has been rarely seen in public since his trip, news of his improving health and wellbeing has been widely reported as well as photos of him receiving seven governors that recently paid him a visit in London.

Acting President Yemi Osinbajo, who had also paid Buhari a visit, announced that he would soon be back home.

This is the second time the president is visiting the UK for medical vacation in 2017, the first being shorter than the present.

Governors and several public figures have come out to defend Buhari’s absence, and to say he has made a miraculous recovery.