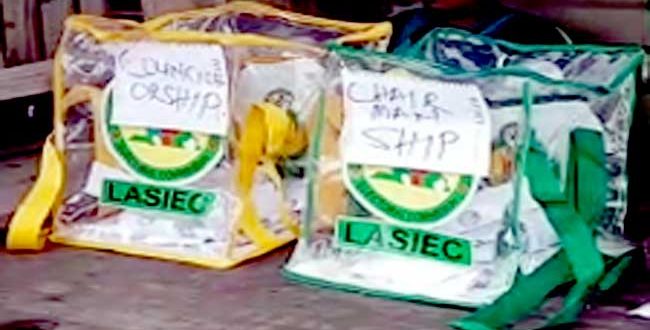 More reactions have continued to trail the results of the elections into the 57 local governments and local council development areas of Lagos State.

Announcing the results of the polls on Monday, the Lagos State Independent Electoral Commission (LASIEC) had said that the All Progressives Congress (APC) won all the chairmanship seats across the state.

Barely 48 hours after the results were officially released, the Peoples Democratic Party (PDP) in the state said that it had discovered how the APC allegedly rigged the polls.

In a statement released on Wednesday, the PDP accused the APC of using thugs to snatch ballot boxes.

“That is where all the results were doctored and votes were allocated to political parties for the returning officers to declare. This is how APC rigged every other party out of the election,” the statement read.

In a swift reaction to the claims, the APC asked the PDP in the state to “shut up” and described the party as a ‘confused’ group of people.

The state publicity secretary of the party Mr Joe Igbokwe said in a statement that the claims portrayed the height of political irresponsibility.

“Lagos PDP should just keep quiet and go home to find out where the rains started beating them. The struggle for the position of the National Chairman of the party by the two factions of the party led by Ali Modu Sherrif and Ahmed Markafi dealt a devastating and debilitating blow to Lagos PDP which split along Markafi and Sherrif political divides.

“When the Supreme Court handed over to Markafi faction, the bubble burst as the Falcon could not bear the falconer and the centre could no longer hold for Lagos PDP.

“The leadership of APC Lagos traversed the political landscape of Lagos in the course of our grassroots and door-to-door campaigns just to check whether the opposition is doing anything in terms of campaigns but we did not see PDP/LP (Labour Party) in action,” Igbokwe said.