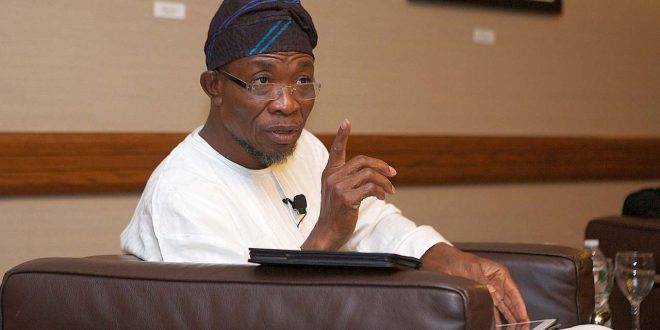 State of Osun Is Not Owing Any Worker Salary, says Aregbesola

July 26, 2017 Comments Off on State of Osun Is Not Owing Any Worker Salary, says Aregbesola 22 Views

Governor of Osun state, Rauf Aregbesola,  says his administration is not owing any worker.

Speaking on Wednesday while delivering a keynote address at a programme organised by the state police command, Aregbesola said workers and pensioners in the state have been paid up till June this year.

He, however, admitted that some workers were receiving 50 percent of their monthly salaries, but clarified that the situation was so based on an agreement reached with labour unions.

He said in spite of the economic challenges confronting the state, his administration had done so much in prioritising the welfare of the workforce.

Aregbesola said there is need to “educate Nigerians “about the salary situation in Osun.

“Some people have been saying that since my administration is conscious about eradicating poverty, why not pay workers’ salaries?” he said.

“Let me make a resounding correction that despite the paucity of funds, it is only a section of workers on grade level 12 and above who receives painfully 50 percent of their gross salaries based on an agreement between the government and the labour union.

“So outside that category of workers on grade level 12 and above, no other receives half of his or her salaries and the workers in this category are just 20 percent of the state workforce.

“Contrary to what the naysayers claim about us, all workers in the state have received their salaries up to June this year according to the payment scheme and agreement. The only outstanding salary in Osun is the month we are in and by the grace of God before the month end, every worker will earn their salary in line with the agreement will have with workers.

“I am saying this to correct the impression of those spreading falsehood and capitalising on this that we have been up to our responsibilities as regards the payment of workers’ salaries in accordance with the available resources.”