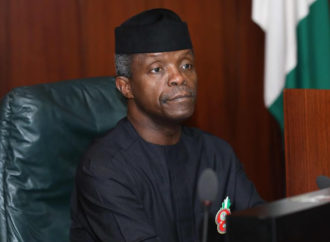 The Acting President, Yemi Osinbajo has sworn in the two ministers approved by the Senate three months ago.

The latest Ministers who are without a portfolio have taken their oath of office and would sit with their colleagues’ Council meeting holding today.

The President, Muhammadu Buhari had nominated both men to replace the late Minister of State for Labour, James Ocholi, and ex-Minister of the Environment, Amina Mohammed, who left the cabinet to become the Deputy Secretary General of the United Nations.