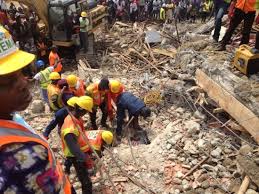 At least one person has been reported dead and 13 others rescued from the rubble of the four-storey building that collapsed in Lagos island.

More residents are feared to be trapped still in the building that collapsed on Tuesday afternoon on Tokunbo Street, off Odunfa Street.

Search and rescue operations by officials of the Lagos State Emergency Management Agency (LASEMA) and other rescue bodies are said to be ongoing at the scene.