Breaking News
Home / Entertainment / Mr. Eazi Opens Up On Relationship With Wizkid, Says Starboy Refuses To Give Him An Offer 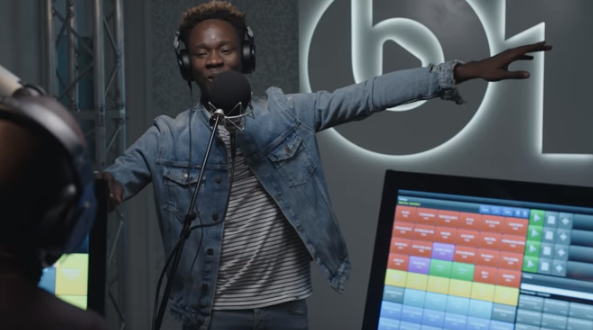 Mr. Eazi Opens Up On Relationship With Wizkid, Says Starboy Refuses To Give Him An Offer

July 26, 2017 Comments Off on Mr. Eazi Opens Up On Relationship With Wizkid, Says Starboy Refuses To Give Him An Offer 109 Views

Mr Eazi says he asked Wizkid to make him an offer on the Starboy record label but the ‘Come Closer’ singer declined.

Wizkid, he says, urged him to tell him “exactly” what he desires from their partnership.

He made this known during a special interview with Julie Adenuga to mark his feature as Apple Music’s ‘Up Next’ artiste for July.

Mr Eazi said: “When I first met him, he just asked me what I wanted and I’m like ‘give me an offer‘ and he said ‘I’m not going to give you an offer‘.

“He said ‘tell me exactly what you want‘ and I said ‘I don’t want any money from you‘ and he replied saying, ‘What do you want‘. And I’m like ‘I want us to work together as a family ‘.

“And that is what it is [till today]. I’m operating how I like and putting out music whenever I like. It’s a sweet thing.”

The ‘Skin Tight’ singer also spoke on how Wizkid once offered him a beat that he was about to lay his vocals on.

“In The Morning, a record on the mixtape, was supposed to be a Wiz record. Legendary [music producer] had played the beat and Wiz was about to record when I just strolled into the studio,” he said.

“I told him, ‘Yo, I have an idea, let me try it‘ and when he heard it, he said ‘I don’t think this is for me anymore‘. Two days later, the record drops and that was the point where I knew we were really up to something.”

Mr Eazi whose musical influences are Fela Kuti and Dcotor Alban, says he enjoys watching Wizkid record in the studio.

“I like the way he feels free,” he said.

Harping on his early stints in the entertainment industry while in the university in Ghana, Mr Eazi said he saw himself more as a show promoter, not an artiste.

His first popular track, Mr Eazi says, was ‘Pippi Dance’, a fusion of Azonto and Ragga.

The singer who calls himself a ‘travelling nomad’ said he came up with the Banku genre of music after making a song called ‘Bankulize’.

Mr Eazi also revealed that he has recorded about twelve songs with Diplo, an American record producer/artiste, who reached out to him via Twitter.

The Nigerian singer will be hosting a culture festival at London’s Roundhouse in September.