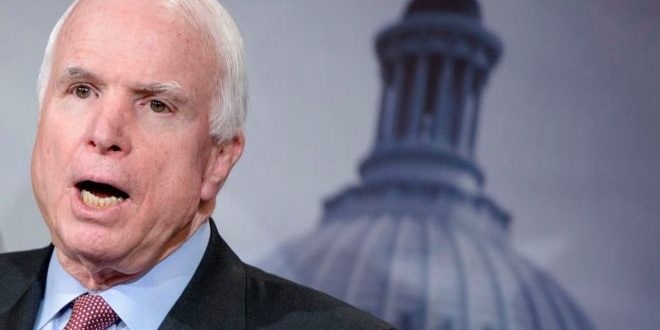 Veteran US Republican Senator John McCain has been diagnosed with brain cancer and is reviewing treatment options, according to his office.

The options may include chemotherapy and radiation, his doctors said. The 80-year-old politician is in “good spirits” recovering at home.

The tumour was discovered during a surgery to remove a blood clot from above his left eye last week.

A Vietnam veteran, Mr McCain spent more than five years as a prisoner of war.

The six-term senator and 2008 Republican presidential candidate underwent surgery at a clinic in Phoenix, in the state of Arizona, last Friday.

Tissue analysis revealed that a primary brain tumour known as glioblastoma was associated with the clot, a statement from the Mayo Clinic said.

“The senator’s doctors say he is recovering from his surgery ‘amazingly well’ and his underlying health is excellent,” it added.

“Treatment options may include a combination of chemotherapy and radiation.”

John McCain is known in Washington as a tough, independent-minded senator – a warrior who is now facing another battle against cancer.

He earned his reputation the hard way, being shot down as a US Navy pilot over Vietnam where he was held as a prisoner of war for more than five years, including two in solitary confinement.

Repeatedly beaten and tortured, Mr McCain was never again able to raise his arms above his head.

During the most recent presidential election campaign, Donald Trump belittled the senator as “not a war hero” saying “I like people who weren’t captured”.

Many Americans were horrified.

Mr McCain may have annoyed many Republicans by arguing for reforms to campaign finance and immigration laws.

He may have irritated opponents of America’s many wars with his forceful arguments in favour of the projection of US military might.

But this country reveres its veterans. The attacks on John McCain’s personal sacrifice were roundly condemned then – and millions of Americans will be praying for his recovery now.

Glioblastoma is a particularly aggressive brain tumour, and increases in frequency with age, affecting more men than women.

Mr McCain, who is the chairman of the Senate Committee on Armed Services, was in “good spirits as he continues to recover at home with his family”, his office said.