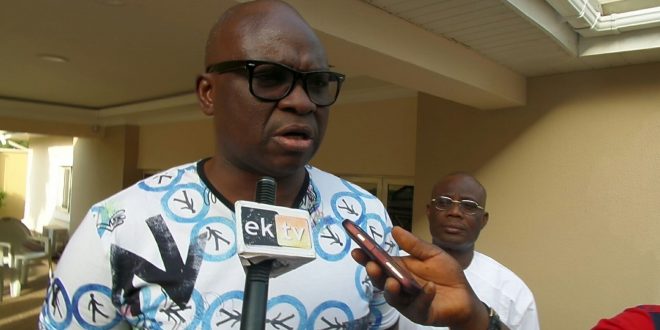 Fayose calls on Osinbajo to release probe report on SGF

July 17, 2017 Comments Off on Fayose calls on Osinbajo to release probe report on SGF 13 Views

The Ekiti State Governor, Ayodele Fayose, in his letter to the Acting President, Prof. Yemi Osinbajo, called him for the release of the report of the panel that investigated corruption allegations against the suspended Secretary to the Government of the Federation, Mr David Babachir Lawal.

Fayose, who is the Chairman, Peoples Democratic Party Governors Forum, also demanded the release of the report on the Director General, National Intelligence Agency, Mr Ayo Oke. He threatened to sue Osibanjo if he failed to meet his demands and “act expeditiously on the reports.”

Fayose’s demands are contained in a July 11 letter, which was reportedly received at the Acting President’s office on July 13.

A statement by the Special Assistant to the governor on Public Communications and New Media, Lere Olayinka, quoted Fayose as urging the Acting President “never to harbour the view that the matter can be swept under the carpet.”

The governor was further quoted as saying, “The government’s war against corruption lacked credibility and has thus floundered because of the government’s perceived penchant for sweeping allegations of corruption against top functionaries of the Federal Government and members of the ruling All Progressives Congress.

“I dare to say that this is one of the reasons the so-called war against corruption has not attracted public support. It lacks credibility and has thus floundered. It is also the reason your administration has lost case after case in the court of law, even though administration’s officials have tried to cover government’s Achilles’ heel as well as their own howling incompetence under the pretence of corruption fighting back.”

Fayose said it would be unfortunate if the report was abandoned.

“The preferential treatment given to the two top-notch members of your government is bad enough. So reckless and audacious has your government become in this regard that a serving senator who is a member of your party said on the floor of the Senate that your government uses insecticide when dealing with alleged cases of corruption involving members of the opposition but applies deodorant when members of the ruling party are involved.