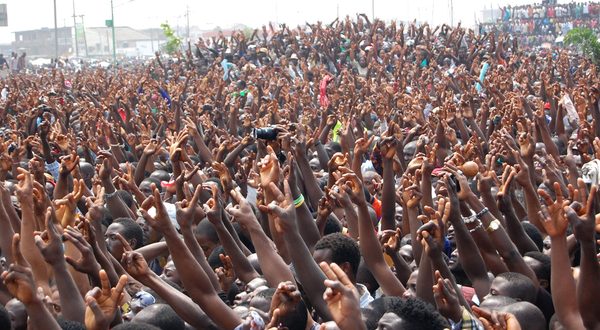 PIC 6. THE CROWD AT A PROTEST RALLY AT GANI FAWEHINMI GARDENS AT OJOTA IN LAGOS ON FRIDAY (13/1/12).

The acting President, Yemi Osinbajo, on Friday, disclosed that 2.3 million youths have so far applied for the 300,000 jobs that are still available under the Federal Government’s N-Power scheme since the portal was reopened in June.

Osinbajo disclosed this to journalists when he visited the scheme’s Response Centre in Abuja.

Under the scheme, which is one of the components of the government’s Social Investment Programme, 500,000 youths are expected to be engaged.

While 200,000 were employed in the first phase, the portal was reopened on June 13 for the applications to fill the remaining 300,000 vacancies.

Despite the high number of the applications, however, Osinbajo said the government would stick to the 500,000 target for now.

He said a decision on whether to increase the figure in the future would depend on government’s resources.

The acting President said, “Already, 200,000 young people have been engaged. And since the programme was opened, another 2.3 million have applied and we are looking at the next phase of engagement.

“But for me, I think what is important is that we are able to do this incrementally and we are able to give hope to some of these young people who need the opportunity.

“We will never always be able to do everything but I think that it is important that we do as much as we can.

Osinbajo said the tablets given to beneficiaries contain useful learning materials that could help develop their skills in a variety of ways and further give them greater opportunities.

Osinbajo said there was no truth in the reports of the alleged backlog of salaries as far as the scheme was concerned.

He said once the Bank Verification Numbers of beneficiaries were verified, they were paid.

“The moment your records are cleared, then you are paid constantly. If you don’t correct these records, then you might be paying the wrong people,” he said.