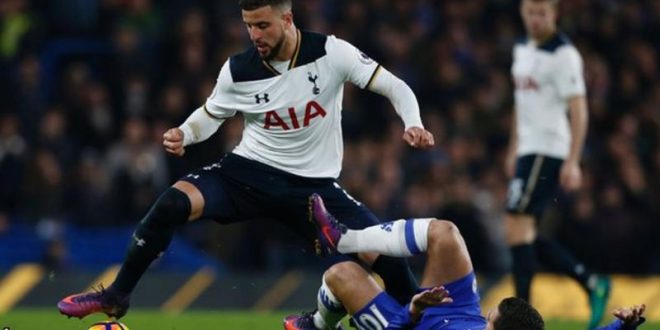 Manchester City are close to completing the signing of Tottenham and England right-back Kyle Walker.

The 27-year-old is expected to have a medical and complete the transfer on Friday after the clubs agreed a deal on Wednesday worth £50m plus add-ons.

Walker, who joined Tottenham from Sheffield United in 2009, will not join up with Spurs for the start of their pre-season training on Friday.

Instead, he will travel with City on Monday to start their tour of the USA.

The club are also keen to conclude a reported £40m deal for Monaco left-back Benjamin Mendy before they depart.

The 22-year-old France international was left out of the French champions’ squad for their pre-season trip to Switzerland.

He missed out on the signing of free agent Dani Alves, with the Brazilian joining Paris St-Germain on Wednesday.

Walker made 183 Premier League appearances for Spurs and he has won 27 England caps.

The defender, selected in the 2016-17 Premier League team of the year, will become City’s third signing of the summer, after the arrivals of midfielder Bernardo Silva and goalkeeper Ederson Moraes.

Share
Previous Finally, Wizkid’s ‘Sounds From The Other Side’ Is Out
Next Watford signed Chelsea midfielder,Nathaniel Chalobah on five-year deal