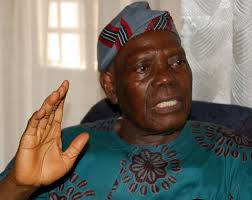 July 12, 2017 Comments Off on Ambode Condoles With Ex-Osun Gov, Bisi Akande Over Death Of Wife 14 Views

Omowunmi, died on Tuesday at the age of 73 in a private hospital in Ibadan.
The Governor in a condolence message signed by his Chief Press Secretary, Mr. Habib Aruna, described late Omowunmi as an epitome of humility, uprightness and one who was a pillar of support for her husband.
“She was a shining example of a virtuous woman, who stood by her husband through thick and thin especially during the period he was incarcerated. She kept the home front together and ensured that his absence did not affect their children adversely,” the Governor said.

While praying for the peaceful repose of her soul, he urged her husband, Chief Bisi Akande, to take solace in the fact that she has gone to a better place and draw strength from the joyful years they shared together.
Governor Ambode also commiserated with the children and relatives of the deceased, just as he prayed to God to grant them the fortitude to bear the great loss.

“On behalf of the good people of Lagos, I want to express our heartfelt condolence to the family of Chief Bisi Akande on this great and irreparable loss”, he said.