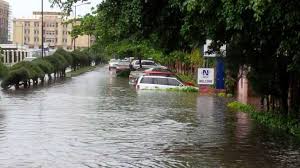 The Environmental Rights Action/Friends of the Earth Nigeria (ERA/FoEN) has blamed the recourse of the Lagos State government to environmentally-unfriendly projects along the entire Lagos coastline, especially the Lekki-Ajah axis for massive floods that submerged houses in several parts of the state during last week’s heavy downpour.

The floods ravaged parts of Victoria Island, Lekki, Ikoyi, Ajah, Oniru and adjoining areas, where a large number of houses were submerged and residents trapped in their homes in the face of rising flood water.

Lagos State Commissioner for Environment, Babatunde Adejare who visited some of the areas blamed the incident on indiscriminate waste dump and urged residents to desist from the act. But in a statement issued in Lagos, ERA/FoEN said the state government interpretation of the watery nightmare was diversionary as the commissioner avoided the real cause of the floods.

ERA/FoEN deputy executive director, Akinbode Oluwafemi said: “We have said it time and again that environmental sustainability goes beyond showmanship and sweet pronouncements. The rains have exposed how dangerous experiments like the Eko Atlantic City project and unmitigated sand dredging along the Lekki and Ajah corridor for the ultimate pleasure of the wealthy can make life miserable for the generality”

Oluwafemi explained that what was at stake with dredging and land grab activities that has thus far displaced a host of communities including Otodo Gbame and Makoko, is a classic case of development versus human rights, even as he alerted that the reckless reclamation exercise in Lagos was now threatening to throw the entire southwest coastline extending down to the Niger Delta into chaos.

“The explanation of the state government conveyed by Environment Commissioner was very watery as it deliberately avoided the subject matter but instead blamed the flooding on near insignificant pieces of rubbish floating around narrow drains. For us, this is an indictment on the government because it is the same government and its agents that grant all sorts of permits for sand dredging and other projects that put pressure on the Atlantic and residents of Lagos in harms way “

Oluwafemi revealed that this level of flood is deeper than the usual rhetoric of previous years because not only were homes flooded, people were terrorized by dangerous reptiles that came with the Atlantic waters that met with the rains waters and had nowhere to go.

“We are using this sad occasion to reiterate our demands that the Lagos State government put a brake on massive excavations and soil reclamation exercises that have displaced locals while creating an earthly paradise for the wealthy. We also ask this government to make public the Environmental Impact Assessment (EIA) on the controversy-streaked Eko Atlantic City Project and others that defy logic at a time that climate change is inducing sea level rise globally. Anything short of a retreat from these dangerous activities will spell doom for all of us. God forbid, “Oluwafemi insisted.