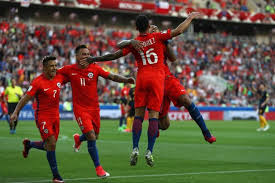 Chile are the first team to qualify for the ongoing Confederations Cup final in Russia after beating European champions Portugal on Wednesday.

Juan Antonio Pizzi’s side progressed to the next round 3-0 on penalties after a tough semi-final match between the South Americans and Fernando Santos’s men ended in a goalless draw.

Chile, however, converted their first three kicks to win the clash of South American and European champions.

The result was justice for Chile after they hit the woodwork with two successive shots in the dying seconds of extra time.

There was also controversy shortly before that when Chile’s Francisco Silva went down in the box under a Jose Fonte tackle but the referee did not consult the Video Assistant Referees (VARs), even though contact seemed to be made.