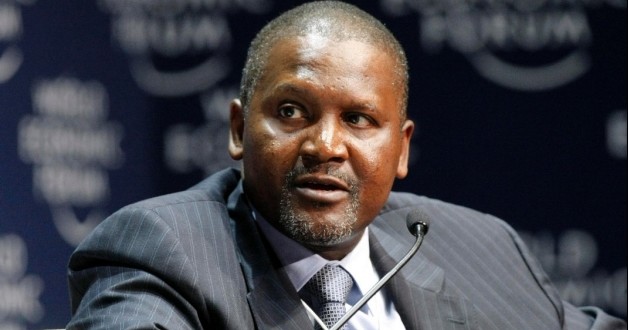 Way Out Of Unemployment in Nigeria Is Diversification, Says Dangote

June 28, 2017 Comments Off on Way Out Of Unemployment in Nigeria Is Diversification, Says Dangote 78 Views

President of the Dangote Group, Alhaji Aliko Dangote, has revealed that the solution out of unemployment situation in the country is diversification of the economy.

“The way to go is diversification. Nigeria should diversify its economy, and take crude oil as icing on the cake.”

Dangote, the richest man in Africa, disclosed this at the weekend on the sideline of a meeting with business leaders/chief executive officers from Nigeria and Kenya held at the Dangote Lekki free-trade zone in Lagos.

He stated that unemployment gives him sleepless nights, as he posited that it’s the collective responsibility of both the government and entrepreneurs to create jobs for the teeming Nigerian youths as a way of solving the restiveness and agitations that the nation is experiencing from different geo-political zones.
According to him, population growth is not abating as population and poverty go together especially in the northern part of the country where limitless procreation is recorded.

Dangote also harped on diversification as the major solution to the unemployment challenges the nation is facing, submitting sadly though, that successive governments had always paid lip service to job creation and diversification.
He said: “Since 1978, when I came to Lagos, government has been talking about diversification of the economy which has not happened up till now. It is also sad that nobody is challenging anybody about how many jobs he or she has created.

“In reality though, it is not solely government duty to provide jobs. It is also the duty of entrepreneurs, but government at all levels must provide the enabling environment. When there is no jobs, people get frustrated, and I can tell you that the Boko Haram insurgency is a product of frustration. The way to go is diversification. Nigeria should diversify its economy, and take crude oil as icing on the cake.”

Dangote appealed to young entrepreneurs especially from the Lagos Business School (LBS) who were part of his audience to brace up for the challenge and do something differently. He described Nigeria as a scratched card that has not been touched, and would be useless after loading it. “Nigeria is like a recharge card. Anywhere you touch is money. You should also have visions and be focused,” he added.

On the quit notice order given to Igbo people in the North by a coalition of northern youths, Dangote said it is a topic not worth discussing, and however, urged the people to stop talking about it. According to him, “Unknown people are talking about Igbo leaving the North, and we are joining them to talk about it. Why are we talking about it? It shouldn’t be discussed at all. Those saying it are just seeking relevance.”

He recounted many world class projects his conglomerates have embarked, including the largest single petroleum refinery in the world with 650,000 barrels per day capacity, and 780 KTPA polypropylene, Africa’s largest urea plant with 3 million tonnes per annum capacity; largest sub-sea pipeline infrastructure in any country in the world with 1,100 kilometres to handle three billion sef of gas per day; world scale gas treatment stations and world class petrochemical complex among others.

Dangote added that his company is determined to transform and diversify the Nigerian economy.
“When we rolled these projects out, there was nothing like devaluation but now, we have to double our efforts and it is not a problem because Dangote group is a leader in the new breed of African multi-national conglomerates, and that is why its rated top 10 in Africa and top 400 globally.

“We are globally competitive, yet growing local capacity and manufacturing quality products. Dangote is rapidly transforming from a Nigerian company to a dominant African brand,” the Dangote Group president noted.

The business mogul told the gathering that while people are scared of investing especially in the recession the nation has found itself, Dangote group has been investing because without investment, there cannot be growth.
He acknowledged the fact that some individuals had invested in the past but failed with their businesses owing to inconsistencies in government policies and power challenge.

To mitigate these hurdles, Dangote said it became necessary to be closer to those in government in order to always exchange ideas on how to improve the economy. On the issue of power, Dangote stated that his company decided to generate its own power in different countries where it operates; it’s only in South Africa and Ethiopia where it does not have its own power plants because it relies on power from the national grid.

In Senegal we, generate our own power and it’s now in excess, so we sell to the government at modest rate.