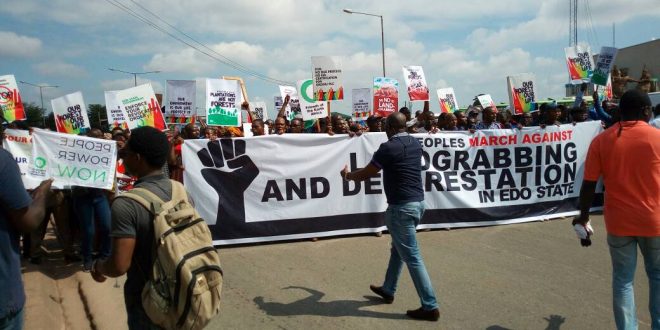 The Environmental Rights Action/Friends of the Earth Nigeria (ERA/FoEN), representatives of the Owan and Okomu communities and a host of civil society groups have urged the Dr. Godwin Obaseki administration to uphold a revocation Order on 13,750 hectares of land expropriated by Okomu Oil Palm Company Plc in the rich forest reserves.

In a letter delivered to Dr. Obaseki after a protest march tagged “Peoples March Against Land-grabbing and Deforestation in Edo State” following Okomu Oil Company’s defiance of the revocation order, the groups and the global environment movement said the current administration owes the community people the duty of enforcing the order.

Under former Governor Adams Oshiomhole the sale of the lands in contention covering an estimated 13,750 hectares spread through Okomu forests reserve to Owan forest reserve were reversed. Till date, Okomu Oil Company Plc has disregarded the Edo state government order.

ERA/FoEN Executive Director, Dr. Godwin Uyi Ojo said: “The defiance of Okomu Oil Company Plc to the revocation order is only typical of what multinationals in the landgrab business do. We anticipate the current administration will not fold its hands and watch”

Dr. Ojo explained that the plight of the affected communities is further aggravated by the poverty that Okomu Oil’s unrelenting bulldozing has inflicted on their only source of sustenance, even as he pointed out that “in the quest for industrial development, the local communities have become casualties”

“This development is totally unacceptable and that is why we ask the Obaseki administration to act with the speed that this issue demands. Okomu Oil Company Plc is in the breach of the law and should not be allowed to go scot-free”