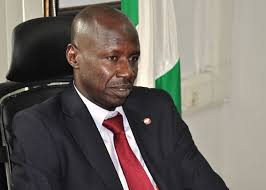 The Economic and Financial Crimes Commission will on Thursday (today) arraign a former Minister of State for the Federal Capital Territory, Jumoke Akinjide, for allegedly receiving N650m from a former Minister of Petroleum Resources, Diezani Alison-Madueke, during the countdown to the 2015 general election.

The money was said to be part of the $115m (N23bn as of 2015) allegedly disbursed by Diezani, part of which was allegedly used in bribing some senior officials of the Independent National Electoral Commission.

The money was said to be part of kickbacks received from oil firms.

The spokesman for the EFCC, Mr Wilson Uwujaren, said Akinjide, who was the Oyo State Coordinator of the Goodluck Jonathan Campaign Organisation, would be arraigned on 24 counts of Money Laundering before Justice Ayo Emmanuel of a Federal High Court, Ibadan.

According to the charge sheet with Suit No: FHC/1B/26C/2017, the former minister, along with the Chairman of the Peoples Democratic Party in Oyo State, Mr Yinka Taiwo, and others now at large, on or about March 27, 2015 within the jurisdiction of the court, did conspire among yourselves to directly ‘take possession of the sum of N650,000,000 which you reasonably ought to have known forms part of the proceeds of an unlawful act to wit: money laundering, and thereby committed an offence contrary to Section 18 (a) of the Money laundering (Prohibition) Act 2012 as amended and punishable under Section 15 (3) of the same Act.”

The EFCC said Akinjide and others conspired to make cash payments exceeding the amount authorised by law without going through any financial institution.

Akinjide first visited the EFCC in August last year where she was made to refund about N10m.

The former minister was said to have applied for bail on the grounds that she needed to travel out of the country for medical attention.

A member of the House of Representatives, Aliyu Pategi, stood surety for her but was arrested when Akinjide refused to make herself available as promised.