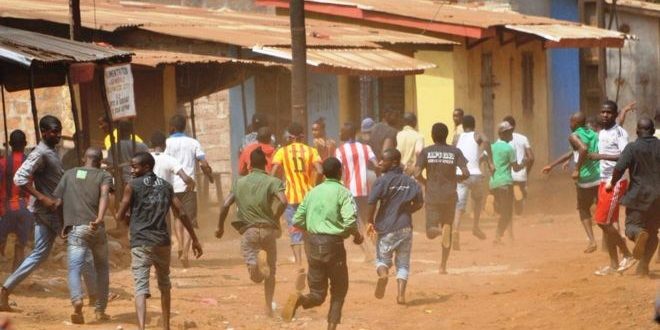 Traders clash in FCT left one dead and four injured

June 20, 2017 Comments Off on Traders clash in FCT left one dead and four injured 28 Views

One person has  reportedly died on Monday while four others sustained injuries during a violent clash between Hausa and Igbo traders at Kuje, a satellite town in the Federal Capital Territory.

There were conflicting accounts of the crisis but one had it that the crisis started after a Hausa youth was arrested by a vigilante group for breaking into a shop owned by an Igbo man.

The suspect, whose name could not be immediately ascertained, was said to have died after he was beaten up.

A security officer, who spoke on condition of anonymity, explained that the suspect died at the Gwagwalada Specialist Hospital, Abuja, where he was taken for medical care.

He said, “But when the Igbo trader attempted to open his shop to take stock of what was there, some Hausa traders prevented him from doing so and in the course of the argument, the issue got out of hand and became a free-for-all.

“Policemen, including other security forces, were deployed to restore peace; they had to fire tear gas canisters to end the violence which was almost assuming a terrifying dimension. In the course of the violence, four people were injured and they have been taken to the hospital.”

Another account however said the clash was between two rival vigilante groups identified as Green House and Kungiyar Zama lafiya.

One Sani Adamu reportedly died during the fracas.

The FCT police spokesman, Usen Omorodion, confirmed the incident in an SMS, but he had yet to respond to a request for the details of the clash as of the time of filing this story.