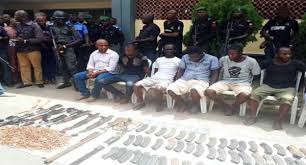 June 19, 2017 Comments Off on Evans Leads Police To Detention Camps In Lagos 43 Views

Notorious kidnap kingpin, Chukwudi Dumeme Onuamadike, a.k.a Evans, on Sunday led a team of Policemen from the Federal Anti-kidnapping Unit to what used to be his detention camps for people he abducted.

The two of the three camps which  is located on  Jakande Estate, Ejigbo, and the New Igando, both in Lagos State are usually where the kidnap victims are kept for days or months while negotiation for ransom are made.

The other one, which could not be visited on Sunday, was reportedly located on Gowon Estate, in the Egbeda area of the state.

While the Ejigbo detention camp is located on Green Street, Jakande Estate, the other is at 21 Prophet Asaye Close, New Igando.

The kidnap kingpin who is now sober, told journalists that his arrest signals the beginning of the end of kidnapping in Nigeria, claiming that his gang applied the best sophistication ever which no gang may be able to equal.

Evans was arrested on June 10, along with six suspected top members of his gang at Magodo Estate in Lagos after “an intense gun battle” with the Joint Special Forces led by the Intelligence Response Team, the Lagos State Police Command’s Anti-Kidnapping Unit and Technical and Intelligent Unit of the Force under the supervision of the Commissioner of Police, Lagos State.

They were paraded at the headquarters of the Lagos State Police Command by the Force Public Relations Officer, CSP Jimoh Moshood.

Police sources said the 36-year-old suspect, who had been on their watch-list for about seven years, is reputed to be the most notorious and richest kidnapper in Nigeria.

He is believed to have received millions of dollars in ransom payment.

According to the police, he has two mansions in Magodo GRA Phase 2 worth about 300 million Naira and two houses in the Highbrow area of Accra City in Ghana among many other properties such as exotic cars, expensive watches, and jewellery, among other things.

Share
Previous DSS To Descend On Hate Campaigners
Next N516bn Paris refund: Labour teams up with EFCC, ICPC on probe