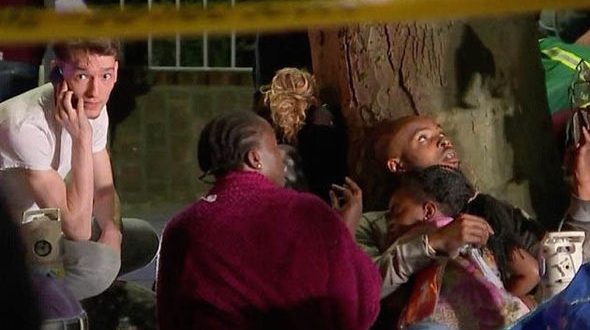 June 17, 2017 Comments Off on Girl saved by neighbour after been thrown down from a 50ft tower during the Greenfield fire 58 Views

A man simply identified as a hero safe a four year old girl life while she was thrown from one of the floors engulf with wire in the greenfield london fire,  the man was among neighbours who helped out at the tower block in north Kensington on Wednesday after it caught fire.

Eyewitnesses described how Pat skilfully managed to catch the little girl from above “like a rugby ball.”

He then cradled her in his arms as they both sat under a tree, looking up at the fire completely shellshocked.

Some desperate residents who were trapped in the 27-storey building threw their kids out of the window to safety and this little girl was among the ones who were caught.

One resident recalled how the little girl’s mum, was on the fifth floor, screaming and crying out for help with the young girl in her arms.

Eyewitness, Kadelia Woods, 20 told Channel 4 News: “The mum was screaming and the fire was raging like crazy.”

Kind-hearted neighbour, Pat, then stepped forward to help and urged the mum to drop the girl, saying that he would catch her. “Pat kept reassuring her and then the girl dropped.

“Everyone’s hearts stopped but Pat managed to catch her like a rugby ball tucked into his chest.”

The tragic mum is feared to be among the dead in the blazing inferno that ripped through the building and claimed 17 confirmed lives.

The death toll is expected to rise and is thought at least 100 may have died.

The girl was treated by paramedics at the scene and Pat was taken to hospital.

It was just one of the stories of heroism to emerge from the tower block disaster that has left families searching for loved ones who are missing.

A baby was thrown from the tenth floor of the building to safety by desperate parents.

Eyewitness, Samira Lamrani, described how an anonymous bystander caught the child and took her to safety.

She said: “A woman was gesturing like she was about to throw her baby, if somebody could catch her baby.

“And somebody did and a member of the public, a gentleman, ran forward and managed to grab the baby.”