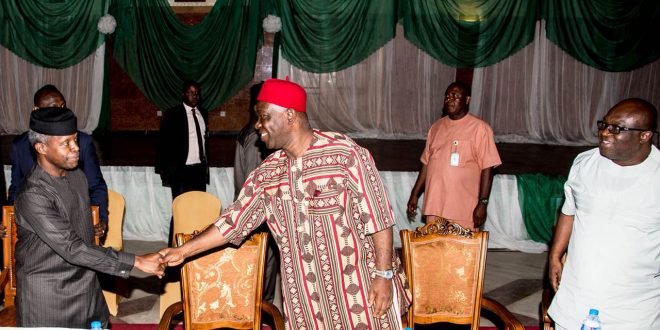 The Acting President, Yemi Osinbajo, on Wednesday warned those who have been engaging in hate speeches across ethnic lines in all parts of the country to always take into consideration that wars sometimes start with words and not necessarily with bullets.

Osinbajo handed down the warning in his opening remarks at a meeting he had with leaders of thought from the South-East at the Presidential Villa, Abuja.

He read his opening remarks before the meeting went into a closed session.

The meeting was in continuation of his consultations over the recent notice to quit handed down to people of Igbo extraction to leave the North by northern youth groups.

He had on Tuesday met with leaders of thought from the North on the same issue.

The Acting President warned his guests that when words were thrown into the market like stones, no one could predict who or what it would hit.

He urged the South-East leaders not to tolerate, excuse or justify hate speech or hateful conduct of any kind, under any guise.

He said, “It is clear that wars sometimes start, not with bullets, but with words. Hateful, incendiary speech, open floodgates of blood. The tongue, like the pen, is often mightier than the sword – because it is what pushes the sword into action.

“When we throw words like stones in a marketplace we do not know who or what it will hit.

“Knowing this, under no condition whatsoever should we tolerate or excuse or justify hate speech or hateful conduct of any kind, especially where such is illegal.

“Let me, of course, acknowledge that as part of living together in this space called Nigeria, misunderstandings and frustrations are inevitable and because resources are limited there will always be a striving to get what is perceived as the best seat at the table.

“All of that is normal and to be expected, especially in a democracy, like ours. A healthy democracy ought to be a theatre of energetic striving by all parties and stakeholders. But things should never descend to a level where mutual suspicions override the desire to live together in peace and harmony.”

Osinbajo said he had told the elders of thought from the North on Tuesday that hate or divisive speech, or divisive behaviour, where it was illegal, would be met with the full force of the law.

While reiterating his position, the Acting President said nobody should be in doubt of the resolve of the Federal Government to ensure that no one would be allowed to get away with making speeches that could cause division or violence.

He said the government would take seriously and would not tolerate any attempts to cause violence or to disrupt the peace of Nigeria.

He added that the government was resolute in its determination to protect every Nigerian, everywhere in the country.

Osinbajo told them that he would meet with religious and traditional leaders from the North and from the South-East on Friday and Monday respectively.

He added that the final consultation which would hold next week Thursday would see all of them from North and South sitting together in the same room for further engagement and consultation.

He said he also planned at some time in between to meet with members of the Nigerian Governors Forum.

Some of those present at the meeting were the President of the Senate, Bukola Saraki; Speaker of the House of Representatives, Yakubu Dogara, and some state governors from the South-East.

Umahi spoke with State House correspondents at the end of the meeting held behind closed doors at the Presidential Villa, Abuja, said the parley had raised hope for a more united nation.

“It was a wonderful meeting and the message we are taking back is that there is hope for a united and peaceful Nigeria and everybody should work hard.

When asked the message he would be taking home to agitators, the governor said, “Everybody has a right to agitate but we emphasised the need for peaceful agitation.

“Even you agitate, your wife agitates at home that the feeding money is not enough. So, it is a fundamental right but it is the manner you go about it. So, it is not an issue that cannot be resolved.”

When asked how confident he was that the messages would be accepted by the Indigenous Peoples of Biafra, Umahi said the meeting was not about IPOB.